In a musical career spanning 38 years, David Sylvian, has become somewhat of a byword for quality, a touchstone of consistency and an ever present ambassador for subtlety and sophistication. Having gone quietly about his business over the course of the last 5 decades he has amassed a stunning back catalogue that stands both as a true testament to such an accomplished artist but also one that clearly shows the depth and beauty of his compositions.

A Victim Of Stars is David's second compilation in as many years, the previous one, 2010's 'Sleepwalkers', focused purely on his collaborative work. This time around we are treated to a two disc celebration of his 30 year solo career. At 155 minutes long you are definitely not short changed. However, what is striking when you start to analyse the track listing is just how much brilliant material has had to be forsaken. Not being picked for the final draft, not making the cut or being passed over is akin to a Galactico being left on the subs bench for Real Madrid (Although I'm not sure Mr Sylvian would appreciate a football analogy, he doesn't strike me as the type!) Some formidable songs being rested that could easily make a subsequent playlist include 'Nostalgia', 'The Boy With The Gun' and 'Words With The Shaman' (Or anything from Alchemy at all) to name but a few. 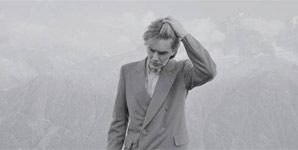 The quandary as to what to select from such a vast treasure trove of riches must have been a delightfully difficult decision. The final 31 tracks are without exception each superb as a singular entity but when heard together in their entirety as a body of work they are nothing short of phenomenal. David's marvellous song writing, perfectly balanced arrangements and idiosyncratic, individual performances makes each of the tracks a formidable one. Combining his clever use of instrumentation and mixing up his reference points has been a mainstay of his diverse musical exploration but the thread that ties it all together is his woefully underappreciated soulful voice. Can a white boy sing soul? The short answer is yes, and then some. What David Sylvian also manages to do, to great effect, is get some Jazzier inflections in there too. With seemingly consummate ease he can give a tenderness and fragility to each tune and then deliver enough emotion and feeling into each track to blow you away every time. If anyone should be receiving BRITS for services to the music industry or Life Time Achievement Awards then the powers that be should look no further.

The highlights are many and plentiful throughout this stunning collection. It all starts with a remix (Don't worry it's a sympathetic treatment not a complete overhaul) of the classic Japan track 'Ghosts' and ends with the only new, previously unreleased, composition on the double album 'Where's Your Gravity'. In between you are just left bereft of superlatives to lavish on the plethora of aural ecstasy. From the chilling first notes of the sensitive and sensational 'Forbidden Colours' to the slap bass laden, powerful, almost funky, 'Pulling Punches', through to the smouldering agonies of the painfully beautiful 'Let The Happiness In' this 1982-2012 retrospective has it all. 'Orpheus' is still as captivating as ever, the horns bleed through punctuating and accenting with such effective precision. 'Pop Song' still sounds as fresh and creative and 'Jean The Birdman', amongst others, reminds us that Mr Sylvian is not all about deep contemplative soul searching melancholy.

Only one song is included here from his last compilation but it would have been a travesty to have omitted it. 'Wonderful World' is just one of the best ways to spend six minutes of your life. With David sharing vocals duties with the angelic Stina Nordenstam it means that there is even more complexity and texture to enjoy and be enthralled by. Taken from his 'Snow Borne Sorrow' album with Nine Horses it is a rich mesmerising mix of magnificent artistry. 'The Banality Of Evil', from the same album, also shows how good the Sylvian/Jansen writing partnership can be. 'Manafon', his last new solo album from 2009, is the oppressive and intense penultimate track. When heard here it almost acts to bookend the 30 years as if it were the Matter to the Anti-Matter of Ghosts. Both songs share a similarity that is not as easy to isolate with any of the other tracks on this album. 'Where's Your Gravity?' acts as the curtain call to a jaw droppingly good set that defies comparison.

As a pioneer of Ambient sound and as a genuinely gifted song writer David Sylvian has been nothing short of inspirational throughout his long and distinguished career, solo or otherwise. A Victim Of Stars 1982-2012 shows just how far reaching David Sylvian's undeniable influence can be traced. There is not one bad song on here. There is not one good song on here, all are without question.....at least fantastic and at best, breathtaking. If you only ever buy one more album you could do a lot worse than to make it this one.