Review of A Million Lights Album by Cheryl Cole 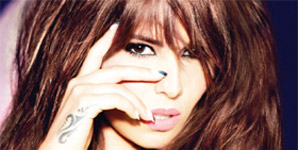 Hardly the kind of language one would expect to hear from the girl dubbed the nation's sweetheart. But then it's probably fair to say Cheryl (nee Cole/Tweedy) isn't exactly renowned for having a way with words. In the decade since Girls Aloud shot to fame via reality television show Popstars: The Rivals, she's become something of a household name in her own right, whether it be as a judge on subsequent televised talent shows or for the profile marriage then break-up with Chelsea and England footballer Ashley Cole. In the meantime, she's also been awarded numerous 'Woman of the Year' accolades from the likes of FHM, Cosmopolitan and Heat Magazine while releasing two multi-platinum solo albums along the way. Not bad for someone considered to be the weakest singer in said aforementioned girl band.

Of course, it's easy to be cynical where someone with the media persona of Cheryl Cole is concerned. Dogged by allegations of racism culminating in an assault charge at the outset of her career with Girls Aloud, controversy hasn't been far behind her ever since. Even as the seemingly untouchable darling of The X Factor judging panel, a public spat with Simon Cowell saw her removal from both the UK and US versions. Despite initial suggestions her career could be in jeopardy as a result, Ms Cole has managed to dust herself down, heal the wounds of time and return to the studio, admittedly with more than a little help from an impressive cast of A-list friends.

So, on to album number three. Enlisting the services of will.i.am, Calvin Harris, Wretch 32, Taio Cruz, Dada Life, Agent X and yes, Lana Del Rey - credited here as Elizabeth Grant - among a host of others, 'A Million Lights' is an all-encompassing affair that seems to veer from genre to sub-genre at the drop of a hat without ever really knowing its place. There is the argument that if this were a credible recording artist rather than a celebrity pop puppet from a manufactured girl band, critics would be lauding the eclectic nature of her record. That's not to say that, to some extent, Ms Cole and her team of producers, writers and co-singers shouldn't be afforded a modicum of credit for at least deviating from the script, albeit in favour of the current trend for dubstep makeovers which over half of 'A Million Lights' finds itself bathed in.

'Are we on the same page?' she sighs on opener 'Under The Sun' and judging by the ten tracks that follow suit, it's a conundrum and a half that no one seems to have paid that much attention to. Not that Cole is any the wiser either, bearing in mind her writing contribution here amounted to a big fat zero. Lead single 'Call My Name' has the Calvin Harris endorsement stamped all over it without ever quite packing the same punch as the Kelis assisted 'Bounce' or 'We Found Love' which Rihanna made her own. 'Screw You', which features Wretch 32 on the verses is slightly reminiscent of Emeli Sande's 'Read All About It' while the title track itself could be a rewrite of Christina Perri's 'Jar Of Hearts', faux sentimentality and all.

The Lana - sorry Lizzie - penned track 'Ghetto Baby' is one of several dubstep-coerced pieces here. Lyrically forgettable to the point where it obviously wasn't deemed worthy of inclusion on 'Born To Die', it's actually one of the weakest tracks on a record not exactly brimming with excitable quality. Better are the bass heavy duo 'Girl In The Mirror' and 'Love Killer', Cole's vocal on the latter oddly masquerading as The Cranberries Dolores O'Riordan in places.

Taio Cruz's writing contribution, the penultimate 'Mechanics Of The Heart', also represents one of 'A Million Lights' better compositions, again employing a dubby wibble that might go down well with the kids if no one else. By the time the schmaltzy 'All Is Fair' brings the record to a close, we're left bemused and bewildered as to who exactly this record is aimed at. It isn't an awful collection by any means; compared to its lacklustre predecessor 'Messy Little Raindrops' one could even call 'A Million Lights' something of a eureka moment; but at the same time, when placed alongside the likes Adele's '21' and Beyonce's '4' it pales into disposable insignificance.