Review of The Lady Killer Album by Cee-Lo Green

Atlanta-born Cee-Lo Green has had quite a temperamental experience within the music industry. After being dropped by his record label after two solo albums due to poor sales but then also having tremendous success as part of the collaboration Gnarls Barkley, Cee-lo now returns with his third offering to prove that he certainly will not accept defeat. 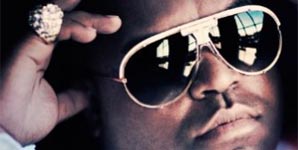 It is obvious to turn straight to Forget You, the huge recent international hit. Storming at the top of the charts across multiple countries, it really brings the 50s US diners back into fashion. But beyond this, the LP harbours some other really stylish and sleek tracks. Wildflower is a cool Motown influenced addition that whilst retaining authenticity also captures a vibrant and sassy streak that explodes into the latter parts of the track. What this and other tracks exemplify is the palpable use of a vast orchestra on this record that not only adds complexity to the melodies but also creates an epic and suitably theatrical sound. Similarly, the opening track set after a quite bizarre Intro, Bright lights Bigger City, sounds like a crossover between a Maroon 5 single and something that would appear on a James Bond Soundtrack. With Cee-Lo's soulful vocals gliding across the circa 90s backdrop, the brilliant production on this establishes it as a standout track.

What Cee-Lo is able to successfully do is detonate a repressed past into modernity. Please is a soulful and authentic single, where the southern US influences are evident. Similarly, Satisfied, probably the best track off the LP, starts off sounding like an 80s game show theme, only to establish itself as a chirpy and uplifting track that whizzes itself into something that you won't be able to get out of your head for a long time. It is apparent what Cee-Lo is doing here. Transforming traditions and conventions from a Motown era and making them resonate to a 21st Century generation is exactly what this guy does best.

However, the album also is, at times, majorly flawed. Tracks like Bodies, whilst sensual and erotic, are just simply too strange, whilst the album does, in the second half, tend to drudge along. After a while, the novelty of Cee-Lo's sound becomes a bit repetitive and you are therefore wanting him to diverge himself from becoming a bit of a one-trick-pony. Fool for You and Old Fashioned merely reveal to us why they were stuck onto the end of the LP as they really don't bring anything to the record. Whilst it's often great that an artist has an established staple sound for themselves, it can enter dangerous territory when your whole album blurs into one monotone.

This album really is the case of being hit-and-miss. Whilst Cee-Lo has the perfect knack of drawing up a dated and niched sound and therefore making it appeal to a modern audience, it begs us to ask him not to become too pidgin-holed. There is no denying that Cee-Lo's amazingly poignant vocals are what saves this album and that the brilliant production highlights an experience that only a few have these days in the music industry. However Cee-Lo, if you don't want us to 'forget you', it is probably best to create something more diverse next time round.