"Hull?" said David Jason. "What the bloody hell am I doing in Hull?". The plot you may not remember; as the mercurial entrepreneur Del Trotter, his character had been deposited after a suitably farcical chain of events in the East Yorkshire city, temporarily leaving behind the delights of his Peckam pied de terre. It was one of the most uncomfortable displacements imaginable, and much to his delight one resolved by a tactical withdrawal to the Smoke at the earliest possible opportunity. 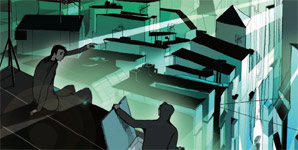 For those suffering from a nosebleed every time they venture north of Watford gap, this is the kind of metropolitan view of culture gapping that university sociology departments pay a fortune to research. The answer however is far simpler; that sometimes music, even when it coagulates inside the M25, even when it's played on Rinse FM and a dozen other pirate stations we in the sticks can only dream of tuning in to, is simply provincial - it just is Hull. Or Mansfield, or Cheltenham. The location in a sense doesn't matter here; it's tunes as a transport, it's the weekend starting on Wednesday, it's smart trainers only, it's homogenised, guilt free good times on a stick.

By this logic The Brookes Brothers debut album is as suburban as chips. Essentially the kind of very familiar up front drum and bass that turns dancefloors into scenes of sweaty, non-violent carnage, it's manufactured specifically for chiselled, impossibly pretty tattooed working class boys and girls to grapple with each other in states of hedonistic abandon. Without any aspirations to either sophistication or originality, the current Dons of this scene may be Chase & Status, but here the massive, technicolour samples and relentless amen breaks suspend everything in an almost constant state of breakbeat frenzy. And at no point does anyone seem like they want to go home.

There are songs of course, and some of them deserve more scrutiny than they're going to get here. Openers Beautiful and Paperchase sum up pretty much what the following hour shapes like, with jet-propelled piano arpeggios, pulverising sub-bass and wonky, autotuned vocals. At times it feels that the ferocious pace of our good time is going so fast it's going to catch up on itself, but the arrival of In Your Eyes, with its heavy, dubstep breaks and reggae intonations gives everyone a breather, before the starship Brookes takes off again at warp speed, bound for all points in the funky universe excluding Bracknell.

Like many a good night out, the morning after will still dawn, and in the fug of too little sleep it's back to the building site, supermarket, or chicken factory. But we'll always have Pozition. And this time next year people, we'll be millionaires.