Review of City Of Refuge Album by Abigail Washburn

If you're unfamiliar with the work of The Sparrow Quartet or Uncle Earl, don't listen avidly to Bob Harris and cannot bring to mind any Chinese/American cross pollinated musical styles and influences you may be forgiven for letting Abigail Washburn slip under your radar of excellence. However if you enjoyed last years July Flame, by Laura Veirs, have a liking for all things pertaining to the Decemberists, My Morning Jacket, or feel like exploring the works of a Mongolian string band then read on.

'City Of Refuge', no not the Nick Cave song or the 'Blind' Willie Johnson song that inspired that one, is both the title track and second album from Illinois born, Nashville based, ClawHammer Banjo player Ms Washburn. The follow up to the 'Song Of The Travelling Daughter' is far more an exploration of America's great musical legacy than some of her previously more stylised work.

Having seemingly had her wish granted that 'Jim fix it for her' to have some of the best contemporary musicians take their part in the making of 'City Of Refuge' Abigail and her producer Tucker Martine made sure they made the most of a mouth-watering line up. 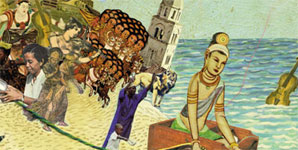 From the first subtle soft Celtic notes of the 'Prelude' the album promises interest and quality. The banjo picks out the opening bars to the title track as the strings, supremely arranged by Jeremy Kittel of Turtle Island Quartet throughout the album, build in the background before the story unfolds and the violin kicks in to add more depth and detail to a fabulous tune....

'Mama's at ease in the socialite places,
Papa remembers the names with the faces.
I can speak on the topic of religion,
Just can't seem to make a career decision.'

'Bring Me The Queen' follows on with Abigail slowing the pace and exposing her tender and frail vocal to a sparse piano arrangement underscored by more warm and embracing string sections. Her voice builds out of its tiny introduction into a more composed but ultimately wounded character. The 'lighter', coincidentally or not, Fleetwood Mac like 'Chains' is the next, and sadly most obvious, track on the album. (Although it does feature pedal steel by My Morning Jacket's Carl Broemel, it's still what your skip button is for). 'Ballad Of Treason' brings proceedings back up to scratch with at times a near a cappella duet interspersed with more lush instrumentation. The fruity horns, violin and layered harmonies are terrific.

'Last Train' tells a wonderful narrative that Johnny Cash himself would have been more than happy with. It is here, mid-album where Tucker Martine's production begins to show its signature themes and some of July Flame's influence can clearly be heard. 'Burn Thru' further underlines this with its slowly developing arrangement that builds to encompass the whole ensemble as Abigail sings of why she's not going down with the rest of you ..................'Now you're asking for answers, you want a clarion call, but you're drowning in Nickels and bouncing off walls. But I ain't no prophet I got no horn to blow.'

City Of Refuge doesn't die out towards the end either. Both 'Dreams Of Nectar', with the bluesy trombone of Diego D-Bone coupled with gospel hues, as well as the final track of the eleven, 'Bright Morning Stars' are highlights that keep the listener rooted to the spot in appreciation of such rich musical quality. The latter track was recorded in a chapel and features the bells ringing out before the song proper starts. Tim O'Brien, Kai Welsh (5x a co-writer on the album) and former Uncle Earl partner, Rayna Gellert all join in for the finale that has a touch of emancipation and Star Spangled Banner combined.

There are a lot of elements that combine to make City Of Refuge a fine record, not least of which is the plethora of talent that has been harvested to make it. The arrangements and instrumentation combine flawlessly to do great justice to the song craft of Abigail Washburn and her co-conspirators. Aside from the odd hiccup City Of Refuge is far from one you should run from.