Review of Gravity Album by Westlife

In the twelve years that've passed since they were manufactured in 1998, Irish megastars Westlife have had an outstandingly successful career. Having matured through ten big-selling albums from a fresh-faced five-piece pop boy band to the four-piece, well, man band that they are today, Gravity is Westlife's eleventh album offering.

Gravity kicks off with an up-tempo pound of a pop song in 'Beautiful Tonight', complete with its catchy chorus and strong, foot-tapping beat; you can always rely on Westlife for a hefty smattering of cheesy, romantic lyrics and this album proves no exception right from the start. By the time track two rolls up, we're straight back to trademark Westlife ground with the first of Gravity's many down-tempo piano-led pop ballads beckoning, like many that have preceded it, many a lighter/phone light waving moment. Complete with the customary slushy string arrangement, the albums' lead single, 'Safe', is a prime example of the big-budget easy listening blend that Westlife have perfected over the years; the following contents of Gravity never falter from their well-established high standard which may not be everyone's bag, but is undoubtedly well-perfected. 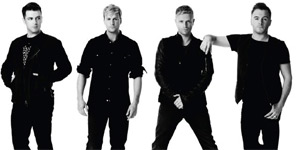 The introduction to track three sounds great familiarity; it's clear when the vocals enter that 'Chances' is in fact Westlife's cover of the Athlete track. It has to be admitted, Westlife do the song great justice, opening with the familiar solo piano chords flanked by gorgeous solo cello, and later kicking into the chorus with a big string arrangement. The track lends itself well to become a strong pop ballad true to the Westlife blend which always seems to start sparsely before building into powerful arena-filling songs. 'I Will Reach You' is another catchy, string drenched sing-along number that follows in the same vein like much of the content of Gravity; cliché yet comforting and crowd-pleasing love songs. Track six's introduction offers the same familiarity felt with the earlier Athlete cover; this time it's Hoobastank's 'The Reason'. Maybe a less well-known track to cover, the mix keeps the rock edge of the original which is perhaps a little unusual for the ultimate clean, mother-pleasing quartet, Westlife.

Gravity continues with the same mature, down-tempo pop ballads from the haunting vocal of 'I Get Weak' through 'Before It's Too Late', another piano-led ballad over a smooth and gentle bed of strings which expressively builds into a powerful arena-filling sing-along, to the albums' beautiful conclusion, 'Too Hard To Say Goodbye'. Along the way, 'No One's Gonna Sleep Tonight' and intercepts as a more up-tempo pop song and similarly, the laid back funky feel of the opening of 'Difference In Me' contrasts many an easy listening ballad.

Complete with two complimentary cover versions amongst a host of blatant trademark Westlife numbers, Gravity doesn't offer anything groundbreaking, nor does it offer anything to take Westlife to another level; it's just a good, strong consistent if safe effort to maintain their high standard.