Review of Wild Child Single by We Are Enfant Terrible

We Are Enfant Terrible make ghastly, dead-eyed electronic pop which is almost certainly destined to be the soundtrack to fashionably soulless hipster parties across Europe this winter. 'Wild Child' and 'Flesh 'n' Blood Kids' are vacuous hymns to vacuity itself, hollow mongrels bred from the worst elements of electroclash and chiptune. 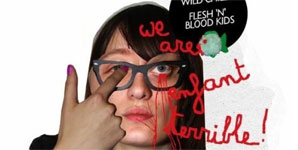 'Wild Child' is built around grating synth stabs reminiscent of Peaches' worse material. It scrapes along interminably, going nowhere and proud to be going nowhere. Technically, this is pop music, but there's nothing exciting or memorable or even especially immediate about it. Drummer and reprogrammed-Gameboy-ist Cyril Debarge provides some aimless, half-hearted 8-bit bleeps which add little to the song, and may well only be there as a nod the fact that chiptune remains quite fashionable. Vocalist Clo Floret babbles away in the manner of CSS's 'Lovefoxxx', without ever sounding nearly as charming. 'You're a victim of the rules you live by/I'm a real wild child', she bumbles unconvincingly.

'Flesh 'n' Blood Kids' is more of the same, a posturing pop song which leans too heavily on a childlike 8-bit riff. Once again, their employment of their Gameboy isn't especially clever or interesting: whereas Crystal Castles made old-skool console chips produce all sorts of alien, unsettling sounds, Enfant Terrible's music sounds like someone playing Super Mario World and listening to Fischerspooner at the same time. It's clumsy stuff. The best track here is the Chew Lips remix of 'Wild Child', which smoothes away some of the tracks more irritating edges and pushes it in a more danceable direction. This is hardly enough to rescue the single, however, and everyone bar the most committed fan of hipster-pop should give this a miss.

We Are Enfant Terrible - Wild Child