Review of Chalon Valley EP by We Aeronauts

I know of the Famous Five and the Secret Seven but I don't believe that Enid ever got round to an eight. The Enchanting Eight, the Eager Eight? No matter. We Aeronauts, from Oxford, are a real life eight piece ensemble who's back story sounds as though it could have been crafted as a latter day wheeze full of adventure, youthful exuberance and plenty of Ginger beer! It's the stuff of future folklore.........although my I-Pod tells me it's not folk, it's Country. (It's wrong)

The bands inspiration for their four track EP has been culled from their time together, two years age, on holiday in France. Whilst there it sounds almost as though they've gone out of their way to make themselves come across as so completely not 'Rock N' Roll'. Listing cycling, lake swimming, The Alps, lush countryside and majestic scenery is not the usual want of some angst ridden performers laying bare their soul. It's a far cry from Rollers in swimming pools, TV's hurtling from hotel windows or nights of debauchery with local groupies, but then We Aeronauts and The Chalon Valley EP are a far cry from stereotypical and I'd take their brand of Indie Folk over any Gallagher (esp Liam's) garbage any day. 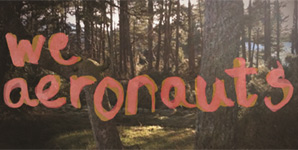 Having been reunited from other worldly travels that have seen band members in places from Serbia, Spain, Mongolia, Canada and also India it is in Oxford that they have come to be together again. The four tracks they have chosen to showcase their talents have a collective positivity to them and a real sense of the group dynamic working in harmony with each other. There is an energy and vibrancy to the tracks which seems to have captured their spirit and comradery.

Kicking off with 'The Boatswain's Cry' the EP starts with an inkling of The Men They Couldn't Hang and the vocal, although with an Oxford lilt, has traces of Gene's Martin Rossiter. The steadily building beat starts off all acoustic guitar and solo voice and then bit by bit elements are introduced to enhance the overall sound. First comes the accordion, the drums and then Anna's wonderfully complimentary accompanying vocal. The pace skips along as the band rallies and then half way through the horns burst in to make the track.

Second track, 'Fleet River', a song about a weekend in Brighton' slows the tempo down. The soft notes that begin the track develop as it progresses to produce an intensity that is only cut back briefly at the breakdown. On a lighter note, and one that the band say really connects with the live audience, is the EP's title track, 'Chalon Valley House Band'. Once again the dueted male/female vocal combination works really well against the minimal arrangement. Here, as with the last number 'Alpe D'Huez', more horns in the mix help to set the band apart from other contemporaries in an increasingly overcrowded folk scene. The use of the choir, recorded at "Oxfords spectacular Christchurch Cathedral' is also a great touch that sees that the EP's end is brought about by a stirring vocal crescendo.

It may have taken years to come to fruition, as all decisions in an eight piece democracy can take time, and involve logistical nightmares but now that they have finally made their record We Aeronauts will hopefully benefit hugely from its release and go on to bring us a full length follow up. (And by then hopefully Tom will be have forgotten his kinship with Justin Bieber and puberty will no longer be a barrier to his creativity!)