Jd & The Straight Shot - Nothing To Hide Audio Stream 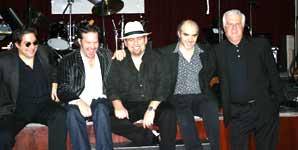 Artist: JD & The Straight Shot
Song title: Nothing To Hide

JD & The Straight Shot's
Nothing To Hide
Full Album Audio

Nothing To Hide is the the debut album by JD & The Straight Shots. Jim Dolan makes his debut on JD Records as lead singer and rhythm guitarist for The Straight Shot with Nothing To Hide.
Dolan has been playing music since he was 15 and three years ago he formed The Straight Shot – guitarist and chief songwriter, Bruce Koplow; bassist, Roscoe Harring; drummer, Wally Usiatynski and keyboardist, Jonny Rosch.
Weaving slow-burning blues jams together with ballads and tight rockers, Nothing To Hide was written from an experienced point of view. "These songs reflect a world-weariness that you don't hear in the typical pop song," Dolan explains, "but they still deal with universal themes that everyone can relate to."
The album takes its name from a line in the song "Slow Motion In Reverse," a shuffling blues set in a neighborhood dive bar. Dolan says the line embodies not only the spirit of the album, but also the spirit in which he lives his life. "My choices aren't based on what other people will think. I do what I believe is right. Whatever reaction you have to me – in business, music or anything – I guarantee you're reacting to the real me."
The album is full of tracks that explore true-to-life stories. It mixes the rhythmic intensity of blues and classic rock with the intimacy of the contemporary singer-songwriter. Anyone hoping to find honesty, humor and spirit in their music will enjoy Nothing To Hide.