Review of Slave Vows Album by The Icarus Line

The Icarus Line are one of those bands that just don't seem to have a place. Like Mínus and Cave In they've straddled genres and carved niches, looking for all the world on the cusp of breaking through, before gradually retreating from the limelight. By now most would presume that Penance Soiree, their second full-length in 2004, would be their magnum opus unchallenged as they drifted into total darkness. Then along comes Slave Vows. 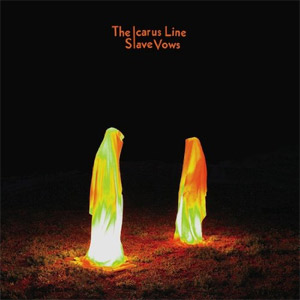 The Hollywood quartet's fifth album is a different beast to their earliest offerings, more willing to take the foot off the pedal and less desperate for attention than what has come before it, and yet it is still wrought with the same uneasy, primal energy. The intro of opener 'Dark Circles', feedback giving way to cascading basslines and drums that threaten to explode for what feels like an eternity, is very reminiscent of the opening chapter of Hookworms' recent debút Pearl Mystic and fans of that will almost certainly be fans of this; a similarly irresistible mix of good old fashioned rock 'n roll, garage, punk, krautrock and the occasional glimpses of prog, shoegaze and country. The good stuff.

There is a definite 'warts and all' feel to Slave Vows. It's gritty and doesn't apologise for it, and nor does it try to make amends. 'Dead Body' struggles valiantly for minutes on end as its monstrous Kyuss-esque desert-rock riff is pummelled by squeals and discordance, whilst the plug is pulled on the following 'No Money Music' the moment it begins to climax past a palm-muted chug.

Perhaps more than any other The Icarus Line album it is a vehicle with only one pair of hands at the wheel; that of vocalist/guitarist Joe Cardemone. Previously he has designated the roll of lead and rhythm guitar to others, but here he takes on the responsibility himself, and thus Slave Vows feels like both a personal war and labour of love between his howls and his riffs, his lyrics and his licks, as they fight for space and oxygen.

In their fifteenth year of existence a cross-over of any magnitude may seem unlikely, but with Slave Vows Cardemone prove they are still fighting, whatever it is they are fighting for.