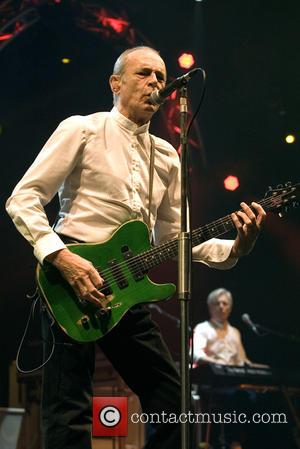 Status Quo stars Rick Parfitt and Francis Rossi were overwhelmed with emotion when they were presented with a tapestry created by a late fan who sewed the huge piece using his teeth following a crippling motorcycle accident.

Janet Booth presented the huge artwork featuring Status Quo record titles to experts on British Tv show Antiques Roadshow earlier this year (14), and Tv bosses were so moved by the story of her late son Colin, who was paralysed from the chest down, they arranged for her to meet the band and show them the tapestry.

In an episode that aired in the U.K. on Sunday night (21Dec14), Janet was seen meeting Parfitt and Rossi, who were shocked by the dedication of Colin, who spent almost 20 years working on the piece before his death.

Rossi said of the achievement, "It's just such a shock to see something like that at all, a kind of discography, but from a guy that was incapacitated. And, to have that much tenacity to follow it through. I've never heard of anything like it."

Colin died before the tapestry was finished, so the musicians added their signatures to the blank space to effectively complete the piece.