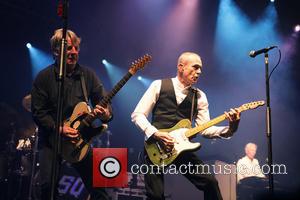 The Rockin' All Over The World hitmakers have teamed up with experts at the Wychwood Brewery in Oxfordshire, England to create the alcoholic beverage, named after their classic 1972 album, and Parfitt reveals he learned a lot about the brewing process during the development of Piledriver.

He tells MorningAdvertiser.co.uk, "The whole process of making beer is quite amazing. I don't think many people realise what goes into making that lovely beer with a nice head on it."

Rossi admits the ale has "a bit of a kick to it", and warns fans not to be misled by the beer's relatively low 4.3 per cent alcohol content, because it's a heavy hitter.

He says, "Interestingly enough, while sipping it, suddenly my knees went. It knocked my knees out, I tell you."

The pair officially launched Piledriver in the U.K. and Ireland on Friday (07Feb14).

The music veterans follow in the footsteps of Motorhead, Iron Maiden, Maximo Park and Mastodon, who have all entered the booze business with their own lines of ales and lagers.