Already this year the North East has spawned one of the best angst-ridden indie bloke quartets of recent years in The Chapman Family, now it's the time of a contrasting superb blend from the girls, one girl in particular; Becky Jones, better known as Saint Saviour. Fresh from appearing on Groove Armada's 'I Won't Kneel' familiar form a BBC advert campaign in the run up to Christmas, and a run of live performances supporting Hurts, stunningly voiced Saint Saviour has released 'Anatomy', which well and truly wets ones' appetite for more. 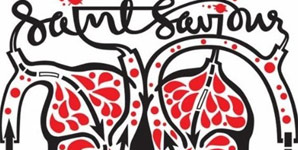 Opening with a big synth and guitar intro pushed by a rapidly pounding beat, 'This Ain't No Hymn' immediately showcases Saint Saviour's divine flexible vocals, perfectly pitched throughout her entire diverse range and with a distinctive tone reminiscent of Kate Bush, even Bjork, over the electro accompaniment. The track then powers into a wonderfully dynamic chorus led by a catchy, soaring lead vocal melody, 'This Ain't No Hymn' immediately declares Saint Saviour's talented blend of a multitude of influences that's far from the bland, run-of-the-mill, female-fronted synth pop that's so common; this is something far more special. 'Birdsong' then launches in with a low synth bass and electric bass drum pound and vocals in right from the off. Gradually building with layers of synths and then pushing into a stronger chorus with a fuller band, 'Birdsong' is again a catchy number led by powerful high-pitched distinctive vocals that are flanked by precisely executed electronic tracks.

In contrast, 'Reasons' shows a different side to Saint Saviour's personality; a solo progression of broken piano chords develops into a gently undulating piano accompaniment to the powerful, almost Adele-like effortless soulful vocals that bring to mind the same strength of former tour mate Claire Maguire. Again, Saint Saviour's vocals move effortlessly between low and higher notes into a beautiful chorus of multitracked vocals, three or four part harmonies; catchy yet elegantly delicate. When the bass and drums crescendo in for the last minute or so of the track, it pushes forward with a powerful drive and vocals that are completely undaunted by the fuller instrumentation, echoing clear above the blend. The concluding track of this brief but superbly formed offering, 'Hurricanes' is undoubtedly its highlight. Opening with a combination of organ and breathy sounds which sound similarity to moody synth-pop masters Hurts, 'Hurricanes' is a heart-felt, down-tempo number that further emphasises the soulful strength of Saint Saviour's vocal with bass and drums throbbing powerfully into the chorus; the track sounds the same heartfelt emotion alongside individuality as Florence & The Machine's 'You've Got The Love'.

Combine this superb offering with her dynamic and entrancing live performances, Saint Saviour is definitely one to watch.