Review of Totem Album by Ryat

American female musician Ryat releases 'Totem' on the Brainfeeder. Anyone with any knowledge of Flying Lotus will know the Brainfeeder label is all about progression and compelling music. It's no wonder Ryat would release 'Totem' on this label, highlighting true sophistication and original sounds. Her unique style and use of interesting production patterns definitely brings an innovative style. The similarities to Bjork would be right in that her sound is certainly influenced by her, but this is an artist certainly with her own integrity and freedom. 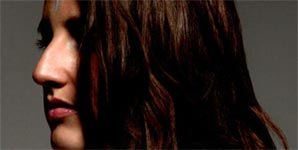 'Totem' is an interesting listen. It's different and her voice makes a great impact throughout the album. The contrast between glitch sounds and piano sections create a soothing yet brooding album. It's full of character and reflective moments. It has the dark melancholy that Radiohead brings to the table and ethereal space that brings deep contemplation to the mix. She's certainly a talent that knows her passion.

'Totem' is a unique album and Ryat should be happy with this offering. Certainly, this album won't be for everyone but it's more about where you can take your soul and the journey is rather compelling. There's many layers to this album that could make it a long player. What's for sure, Ryat is bringing something original to the mix that deserves praise in a progressive sense. Pretty cool stuff!