Having been growing in the rock scene for the last few years, American trio of brothers Radkey have been making a name for themselves as one of guitar music's more promising new bands. They released EPs 'Cat & Mouse' and 'Devil Fruit' in 2013, and both showed them to be a band that know how to write distortion filled riffs that pack a punch and a good hook that sticks in your head. Now their debut full length 'Dark Black Makeup' is upon us and sees Radkey grow even stronger. 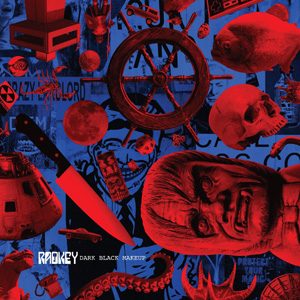 Things get off to a thrilling start with the raw, galloping riffs of the title track featuring droning vocals that channel Jim Morrison and Danzig. Immediately electrifying. The chorus is very infectious with bouncy grooves and catchy rhymes. It sounds like it could have soundtracked 80s cult vampire film 'Lost Boys' the way the lyrics talk about 'waking these kids up' and 'capes and dark black makeup', not to mention the anthemic, fist-pumping vibe.

Next we have 'Romance Dawn' which starts cool with easy going guitar stabs, but the sudden upsurge in tempo is a dance-worthy adrenaline shot.

Radkey's bluesy side comes out for 'Love Spills'. Here there's more bending of the strings. It's slower and less battering than the previous songs, but once again they deliver a song which is very hard to get out of your head. Radkey have a way with words; simple but not dumb or insincere: 'Love spills, and it looks so pretty, got a feeling that it makes me dizzy, my heart skips but it's always spinning, in this world, in this city'.

'Best Friends' also hits the breaks on tempo with a stoner rock vibe. There's a strong Queens Of The Stone Age influence here with tough but subdued guitars. 'Le Song' starts off a lot like 'Na Na Na' by My Chemical Romance with an almost identical monosyllabic chant. The Misfits influence is strong here in terms of the speed and the senseless repetition of 'come a little bit closer', like a lost track of that band's seminal 'Walk Among Us' record.

'Hunger Pain' is quite soft compared to the rest of the album, but retains the band's guts, while 'Song Of Solomon' lifts the mood in poppy punk fashion with Ramones-esque riffs lightly chugging away and the joyous roaring  of, 'I, have given up, I'm a let down'.

'Evil Doer' sounds slightly fuzzier and vocals are just a shade more sombre than anything else on the record. However, it's not all doom and gloom as the manic 'Glore' comes in with jumpy vocals that sound like someone having a nervous breakdown.

With 'Dark Black Makeup', Radkey have delivered a solid, straight-up rock record with riffs that are raw and full of energy as well as strong vocals that demand and deserve your attention. Whether Radkey are playing it fast or slow, moody or upbeat, their tough tone and memorable song-writing make for a collection of songs that are infectious and a sheer blast.