It's difficult to argue with the fuss that's being made about Nevermind's 20th anniversary. This is after all a groundbreaking album for a number of reasons. It reintroduced loud guitars to the charts, was pivotal to the success of Grunge, dictated the musical landscape of the early 90's (which was struggling to escape the mire of 80's pop), and introduced a mainstream audience to the tragic figure of Kurt Cobain. 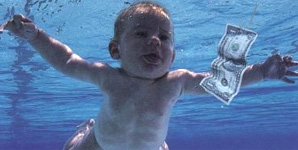 Having previously been signed to Sub Pop this was Nirvana's first major label release and the reluctance to follow Geffen's suggestions for production personnel is in part what led to the distinctive sound of Nevermind. Retaining Butch Vig from previous sessions as producer, recruiting Dave Grohl as drummer, and drafting in Andy Wallace to mix the record on Cobain's suggestion, led to an overly polished, but well constructed album. This new anniversary edition successfully unpicks that process to present material from every part of Nevermind's gestation. While the new tracks range in sound quality they paint a portrait of a band struggling to maintain their integrity, while being thrust into the limelight.

The first disc presents a remastered version of Wallace's mix, There's certainly more clarity on some of the louder tracks, adding depth to Novoselic's bass and making Cobain's vocals clearer, but the slightly tinny drum effects that Wallace created are still evident. Complimenting the remaster are the readily available b-sides from the period. These are predominantly live tracks with a couple of new compositions, the most famous of which, 'Aneurysm', without question deserves its place alongside the album tracks.

The slightly more hit and miss second disc presents two important additional artefacts that will help you to understand the album's history. The first 8 tracks comprise the Smart Studio Sessions, which saw Vig capture early ideas for new material (along with a rather good cover of the Velvet Underground's 'Here She Comes Now'). These recordings were the reason Geffen signed Nirvana, and they still sound great. They're heavier and have an intensity missing from later studio incarnations. Listening to 'Breed' predecessor 'Immodium', it's clear that distortion and fuzzy basslines were high on the agenda in the studio, something that got watered down by the time Nevermind was released. The next 8 tracks are the boombox rehearsal demos. As suggested by the name, they're a little more basic in terms of sound quality. However as a curio they provide a good overview of songs developed in the 12 months after the Smart Sessions. It's also worth investigating the radio sessions found right at the end of the disc too, with an ominously gloomy version of 'Something In The Way' taking pride of place.

Rounding off the super deluxe set are the Devonshire Mixes and the CD/DVD combo of Live At The Paramount. The former presents Nevermind (minus 'Polly' and 'Endless Nameless') as envisaged by Vig in the studio without Wallace's subsequent neutering of certain elements. In essence it's what the record should have been and for many will be a preferred mix. Grohl's drums sound stronger, tracks bleed through to each other and there's a sense of raw urgency that was missing from the final mix.

The addition of a live gig is also worthwhile and it's pleasing to see this has also been released as a standalone DVD outside of the super deluxe version too. The only criticism that could be levelled at the Nevermind box set is the lack of any DVD documentary to give context to the musical jigsaw pieces on offer across the multiple discs. However very few deluxe editions manage to successfully deconstruct their parent record, but it's fair to say that the care and attention that have been put into Nevermind's 20th anniversary certainly bring a fresh and welcome perspective to a record that really did change a generation.