'Burden' is the second EP from red headed (...it's the reason they initially got together!) London folk duo Worry Dolls. Formed 3 years ago, after meeting at Macca's former school, Rosie and Zoe have been winning over audiences and garnering critical acclaim ever since. Their blend of angelic harmonies and breezily refreshing music is both articulate and arresting. 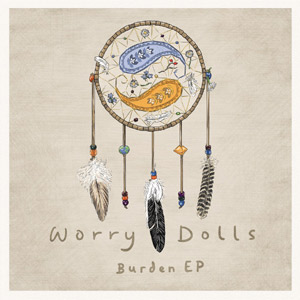 Although the pluck of the banjos and layered harmonies have an echo of Alison Krauss or Abigail Washburn, Worry Dolls have an altogether more English sensibility to complement their American influences. The fabulous vocal harmonies are akin to those of the sisters of First Aid Kit or even Brighton's own Half Sisters.

Their new four track EP, released in June, kicks off with the immediately engaging 'Long Gone'. The stripped back start is as good an introduction to the duo as you could wish for. Crisp vocals and looping banjo lead into an upbeat, ridiculously catchy chorus that is pointless and puerile to even try and resist. With a message of affirmation and belief to "to stand your own ground, take a leap of faith and leave it all behind." Worry Dolls do just that.

'Be So Cruel', a nostalgic, somewhat regretful, tale of lost friends takes a slightly more sombre tone but still balances the vocal duets and instrumentation beautifully throughout. As the harmonica fades the silence gives rise to possibly the best vocal pairing on the EP, 'Shaking In Our Boots' is all about Rosie and Zoe's vocal synergy. They may have happened upon each other by a chance hair pairing but you'd be hard pushed to find a finer vocal match than theirs.

The EP name checking finale is 'Monkey On My Back'. With a faintly familiar feel (I keep half hearing the Magpie theme in there somewhere) 'MOMB' is all about proving the negative voice in your head wrong: shedding the burden. The song that led to the EP follows on effortlessly from the previous three and is a fitting conclusion to a great second release from Worry Dolls.

Rosie and Zoe, Worry Dolls, have been fortunate enough to find each others voices but not only that they have also shown that they can write and craft some fantastic songs to showcase them.