So the cliché goes, men are visual creatures. Whilst the theory is most often used by people to explain why product A will be more attractive to a male than product B, a more hopeful set of evidence resides on Trevor Ransom's Facebook page, which consists almost entirely of photographs taken in nature, or with it juxtaposed in elegant, feathery little ingresses made on the borders it occupies with the human race. 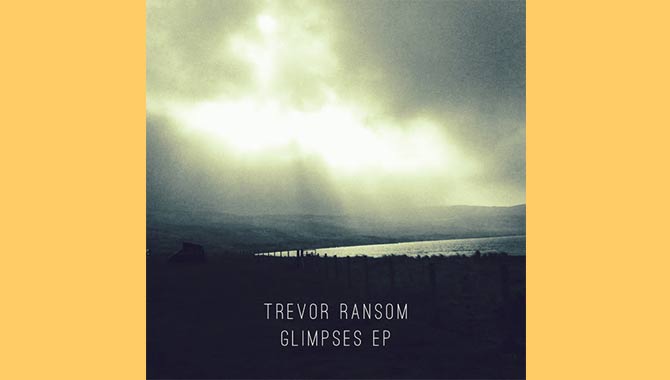 Ransom wrote much of the rich musical soundscapes that make up Glimpses - his début EP - whilst staying in a Christian ministry centre in Middle England, but his lineage isn't as obvious as his name would suggest. Born and raised in Seattle, the producer found himself creatively drawn to the Ice Age-carved  features of the Lake District, bodies of water which would be more romantically entitled Lochs were they just a few hundred miles further north. It's from this profound elemental rush that his main inspiration is divined, tempered he admits with a cycle of emotions that range from "Despair, loneliness..to hope, peace, excitement and passion".

Dealing in often wordless spaces between electronica, neo-classical and blissed out folk, Glimpses is inevitably an exercise in subjectivity for the listener: opener Out Of Focus In the Forest builds over time, the atmosphere flitting from bleak to celestial, great rays of synthesised melody piercing the gloom just as the solitary notes seem likely to be enveloped in sadness. Brought here by a cathartic break-up with a former music partner, Ransom's origins as a maker of hip-hop are often well concealed, other than on Rags, the most composite work here, on which orphaned beats and burbling, sampled loops create a weird but somehow welcoming sense of past and future occupying the same place.

As a representation of one man's personal ascent from despair to elsewhere, the cues are not quite as obvious as you might expect, even if the breadcrumbs to follow are laid out chronologically as Ransom's hinted. There are few obvious bridges: the title track is symphonic, it's hi-hats and cresting beats never really allowing anything to settle conclusively to a pattern. On Cathedral a predictably overwhelming tide of choristers help drag the feeling from one of sepulchral doubt to a more welcoming crescendo.

Perhaps it's easiest to judge the producer's candour as only an interpretive metaphor: he sees the context of his music as "...fixed in neither the extreme of happiness...or despair" and maybe so should we. Armed with this approach, the stark piano and echo-laden white noise of closer Incandescent are more simply a journey between fog and the conscious state of personal low tide, Ransom crooning "I'm sinking" as the beats become less moribund, a revocation of the early gloom. It sounds on paper like Glimpses is an inward looking essay on loss, but it's far from that in the real world, proof that the eyes as we know can be easily deceived.