You may think that the relative calm and unassuming nature of Ramsgate would not attract the arty and the avant-garde but you'd be wrong. The post-impressionist painter Vincent Van Gogh taught at a boarding school in Ramsgate for a while after his move from Stockwell. Comedic writer Frank Muir and Hawkwind founding member Nik Turner (as well as PM Edward Heath) were educated here. On Friday, avant-garde group The Pere Ubu Moon Unit (at one time dubbed Avant Garage) which was founded back in 1975 in Cleveland by David Thomas, took to the stage of the Ramsgate Music Hall. 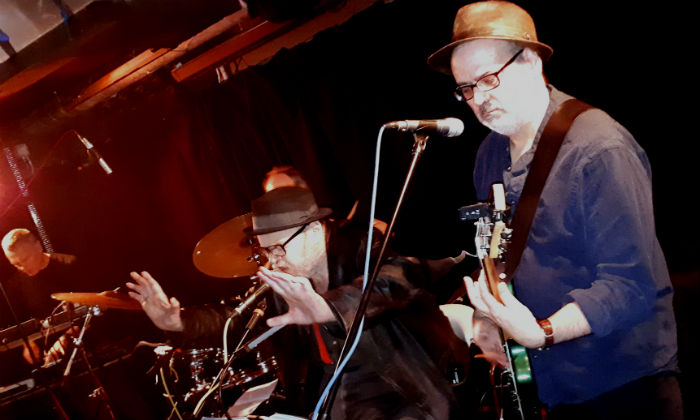 Following in the recent footsteps of such performers as Gruff Rhys, The Pop Group, Gwenno, Wreckless Eric, The Lovely Eggs, Idles and even Jarvis Cocker, David Thomas made his way, slowly and with quite a lot of help, onto the modest stage of Ramsgate's esteemed independent venue. Once he'd cast his crutches aside and made himself comfortable on his ivory and chrome bar stool he announced that, for only the second time, he and his band would be playing their new album 'The Long Goodbye'.

Before Pere Ubu struck a note, Margate's very own Gang took to the stage in the support slot. The four-piece with three guys, two troubling mullets and one girl, played an unpunctuated set that veered between Mike Oldfield, Frank Zappa and Metallica. The talented musicians may have been trying to reimagine Roxy's 'For Your Pleasure' but in reality they just made an awful racket. The lead guitarist's penchant for sticking his tongue firmly into his cheek as he played (as if simulating a BJ) did not make the experience any easier and his deranged yelps, "you thought you could defeat us" among them, only served to make for an uncomfortable half hour.

The one constant of Pere Ubu over the last 43 years, David Thomas, made his way from his home in Brighton to perform his new work, which he said was in some way a conclusion to Pere Ubu. After this he/they would be going in a different direction. And so, in the intimate setting of the not quite as grand as it sounds Ramsgate Music Hall, Pere Ubu set about their performance. Clad in his black leather Donkey Jacket, black slacks, black shirt, black Velcro boots, black Pork Pie hat and pillar box red braces, Thomas looked an uncompromising and, although frail, authoritative figure.

Thomas and his three bandmates made a good fist of the new material. 'Flicking Cigarettes At The Sun', 'What I Heard On The Pop Radio', 'The World' and 'Fortunate Son' demonstrated that David Thomas has lost none of his creative flair nor is his writing ability on the wane. The songs, however, had clearly not been greatly rehearsed and throughout the set there were a few false starts. Ahead of 'Road Is A Preacher' Thomas said that "this is the hairy part of the show, we're all worried about it." Thomas did not appreciate it when he didn't hear exactly what he was after and was quick to apportion blame to those around him in no uncertain terms.

When the band were all firing together, the new songs showed great potential and brought to the fore the still formidable and sometimes foreboding vocal of Thomas. When the band and DT were not in sync, there were some moments that lead to Thomas brutally scolding his band mates. At one point, when he'd brought a stop to a song, DT fumed, "The idea of this song is that you stay out of my f**king way". The rest of the band gave each other a knowing look and dipped their heads like naughty school boys. You could argue the case either way that Thomas was exacting or just cantankerous and crotchety.

Thomas addressed the audience between slugs of red wine, calling out what a nice town he thought Ramsgate seemed, about Orsen Wells and how he should have played him on film, about Raymond Chandler having all the best lines and also rather disparagingly about his adopted hometown of Brighton. There were at least two songs about the East Sussex coastal town: one a laid-back homage called 'A Lovely Day' and the other a more caustic observational track entitled 'Skid Row On Sea'.

At the end of the album runthrough, Thomas remained seated and asked how long they'd been playing before explaining that he and his band would not be leaving the stage and coming back on for an encore as it would take at least twenty minutes. He called out his initial entrance as "a possession" and did not want to repeat it. So the band and David Thomas remained on stage for three final songs. It was a privilege to see a truly gifted, creative and inspirational figure in such an intimate venue. Pere Ubu's legacy and influence cannot be under-estimated but tonight, disappointingly, was not David Thomas at his finest. It was good but not great; his own displeasure at the sound being produced was at times clearly evident and undoubtedly affected his performance.