Review of State of Mind Album by Raul Midon 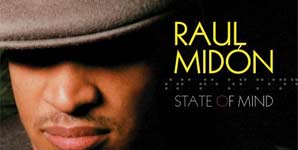 Singer-composer-guitarist Raul Midon's debut album is 'State of Mind' with influences ranging from soul, r&b , pop, folk, jazz and latin. He's not new to the music business having written songs for Little Louie Vega and toured with him in early 2000's.
He's written/co written every song but one ('Sunshine') on the album. He also features artists like Jason Mraz , Stevie Wonder and Traincha on the bonus track.

The album is totally acoustic and there is a folky feel about Raul Midons music. This can be traced to his obvious influences; Stevie Wonder featured on 'Expressions of Love' (with his trademark harmonica), Donny Hathaway- to whom he's dedicated 'Sitting in the middle', Richie Havens and Jose Feliciano (arguably the first Latin artist to cross over into the english music market).

The acoustic guitar session starts off with the lively title track, with its positive message of living dreams and desiring more because its all a 'State of Mind'; He shares /hear people talk about going to heaven/grab a little bit of heaven right here on earth/troubled times lead to healing times/.... He then slows it down on the next song 'If you're gonna Leave' a song about losing love and wanting it back.

The next song is the rousing Latin jazz effected 'Sitting in the middle' (dedicated to Donny Hathaway and produced by one of Donny Hathaways producers) which is one of the many Latin inspired songs on the album that match the pace of the title track. There's more of his Latin inspiration on 'Never get Enough'; with a palmas driven flamenco bridge and the ebullient 'Sunshine'; where Raul Midon (son of an Afro American mother and Argentinian father) breaks into Spanish at some points on this song written by Louie Vega. The congas/spoken word driven 'I Would do Anything' is another song where he flows into the passionate delivery associated with the Spanish language.

There's a consistency of voice clarity on all the songs thats a testament to his vocal ability and this aids the honesty you feel coming from his words.

I was really enjoying this album and decided to dig for some info on Raul Midon and I was really moved to find out he was born blind and like Stevie Wonder he's channeled his lack of sight into delivering positivity through his music. He tries to give the listener a taste of what it must be to live blind on the sublime 'All in your mind'. And he really gets into Stevie mode (or maybe this is just as a result of the brilliance of the harmonica playing) on 'Expressions of love', a song with a positive message ending on the note /here's to hope and time'...my only grouse is that its a very short song.

My current favourites are 'Keep on Hoping' featuring Jason Mraz; there's a verbal and acoustic guitar banter between both artists thats refreshingly bouyant as they both admit hopes of winning love over a reggea inflected melody and the very soulful 'Waited all my Life' delivered in a very live-cafe-session style. Further traces of the Latin influence show up on 'Mystery Girl'. The European version of the CD has the Bonus track 'Where is the love' Featuring Traincha.

'State of Mind' is produced by the Mardins and Raul Midon confesses the mix of their Jazz background and knowledge of the recording processes peculiar to acoustic guitar convinced him of the perfectness of the match between him as an artist and them as his producers as they would help him deliver his positive message, this they have done...

Its very clear that Raul Midons outlook on life is a very positive one and you can get a taste of this positivity on listening to this inspiring and inspired album.