Review of Grandfeathered Album by Pinkshinyultrablast

In an age where formulaic TV talent shows have become inescapable, Simon Cowell and his revolving door of equally fiendish collaborators have long kept hostage the expression: "Unlike anything I've ever heard before." It has become synonymous with noises truly unbearable and the humiliation of a delusional dreamer who's been told they can sing by their half-deaf nan. However, in describing the most recent creation of Pinkshinyultrablast, the band's second studio album, such an assertion carries only positive connotations, masterfully capturing its uniquely mesmeric appeal. Indeed, with Grandfeathered, the St Petersburg based outfit arrive from Russia with love, innovation and a whole lot of noise, creating one of 2016's best albums in the process. 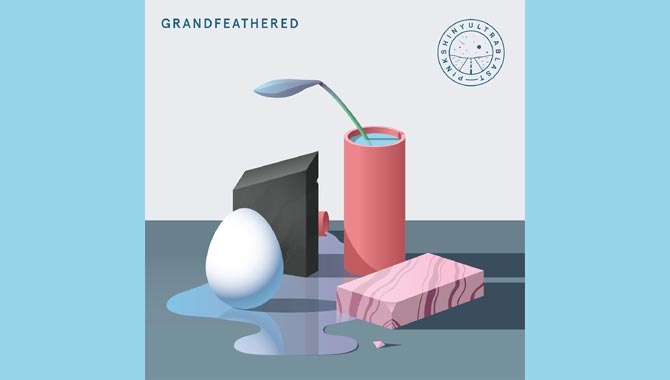 Logically named opening track Initial establishes a euphoric tone that permeates through the whole album, building from enticing flashes of guitar to full-blown instrumental warfare. Subsequently, Glow Vastly harmoniously marries the joyous anticipation of glaring synthesisers with the bombastic energy of crashing drums and jolts of jarring guitars, creating a pool of delightful sounds. The album's highlight falls in the middle with Kiddy Pool Dreams, a six minute epic that provides the listener with an escape into youthful freedom and entry into a world soaked with neon radiance and glittery frivolities. This relentless momentum continues through the second half of the album, with title track and closer Grandfeathered culminating with the most dynamic collision of sound on the whole record, a perfect end to this thunderous journey.

Through these clattering instrumental arrangements pierces the mysterious angelic temptations of vocalist Lyubov Soloveva. Singing in English instead of her native Russian, most of Soloveva's words remain undistinguishable, yet undeniably alluring. Her most comprehensible line on the album falls in third track I Catch You Napping, where she longingly wails: "wish you were with me", seemingly unaware that the intense enchantment of her voice has captured the listener's complete attention from her first note.

Grandfeathered also impeccably compliments and contrasts the band's debut album, 2015 release Everything Else Matters, amplifying the at times murky arrangements as if on an uncontrollable sugar rush. Yet perhaps the most remarkable thing about Pinkshinyultrablast's most recent creation is the variety they have achieved, even with such a distinctive and unique sound. No track feels out of place or a repetition of one that has come before it, making it almost impossible to listen to a single song without being tempted into experiencing the whole album. It truly is an unmissable and unique beast that redefines the traditional conventions of shoegazing; one listen really isn't enough to do this album justice.