Live review of Ian Skelly at the Voodoo Rooms, Edinburgh

Touring off the back of his 2012 debut album Cut From A Star, Ian Skelly of Coral fame is holding his own as a lead singer/front man showing that drummers are capable of more than just keeping the beat. He is joined by his band The Serpent Power including fellow Coral member Paul Duffy on bass, Paul Molloy on lead guitar and Phill Murphy on drums. Perhaps playing to a smaller crowd than he's used to at Edinburgh's Voodoo Rooms, Ian Skelly and The Serpent Power delivered 11 perfectly and beautifully formed songs. 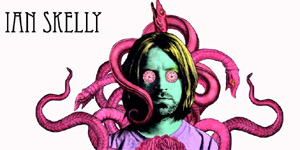 Starting with the album's title track Cut from A Star; think Manfred Mann's "One Way Glass" meets Julie Driscoll, Brian Auger and the Trinity's "Wheels on Fire" meets Simon Dupree's "Kites" with some Pink Floydness thrown in for good measure; it's chillingly delicate and mesmerising yet meaty sounding at the same time. It's followed by Paper Sky, with even more psychedelic 60s sounding vibes yet distinctively different from Cut from A Star. Other songs performed included; I See You, Firebird, DNA, Silver Song, Nickel and a Dime and My Madonna performed by lead guitarist Paul Molloy. The Beatles/Byrdseque sounding Its Only Love signalled the end of the show, much to the crowd's and my own disappointment.

To describe each song without using words such as psychedelic, Floyd, 60s and trippy would be nigh on impossible, but these songs seem to have a modern feel to them. My verdict: buy the album and then see the main man. Well worth every penny...