On record noise-hop outfit Death Grips have been one of, if not thee, most frequently exciting band(s) of this decade thus far, managing to get at least one album out a year since 2011's 'Exmilitary' mixtape right up to this year's barbaric 'Bottomless Pit'. Death Grips consists of vocalist MC Ride, drummer/producer Zach Hill and keyboardist/producer Andy Morin. Across the records they've put out, they've continuously helped revolutionise hip-hop with a newfound sense of loud and experimentalism for the genre thanks to Ride's animalistic vocals, noise-influenced boisterous, yet memorable production and the band always finding new ways to switch it up and keep their albums varied. However, when it comes to Death Grips in a live sense, much is left to be desired in comparison, with the band rarely playing (which might be the key to their recording success) and even failing to show up for shows. With that being said, the UK is being treated to a handful of shows and tonight Death Grips hit a sold out Manchester Academy to reveal that the wait has been worth it. 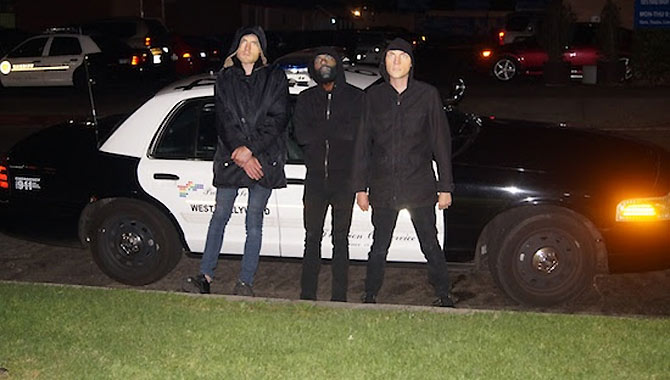 After an hour and a half of creaking ambient noise in pitch black, as opposed to a support act (cause you know, that'd be too regular for Death Grips) they waste no time opening with the half sporadic, half hazy 'Whatever I Want (F**k Who's Watching)' and people are instantly huddling as close to the stage as they can, making this place like a prison riot and the chaos doesn't let up for the rest of the show.

There's clearly a lot of built-up anticipation to see Death Grips from fans, causing them to be crammed shuffling to the front, whilst the primal nature of Death Grips' songs simultaneously propels them into a frenzy. Whether it's the dazzling 'Get Got' or the colossal punch of 'Why A B*tch Gotta Lie', people lose themselves to the energy made by how thick Death Grips' stomp is.

'No Love' is about as sinister as it gets with cold, cybernetic beats which are like a Terminator marching towards you, confrontational lyrics like 'you're fit to learn the proper meaning of a beatdown, madness, chaos in the brain' and colossal pits open up for people to then flail to the iciness.

'Lord Of The Game' is the only time you'll catch people slamming to the 'I AM THE GOD OF HELL FIRE' part of Arthur Brown's 'Fire', which Death Grips so seamlessly weave with tribal rhythms and Ride's juggernaut flow. 'I Break Mirrors With My Face In The United States' marries pulsating drumming with burley, spacious, drones invoking people to make a huge rectangular space on the floor, only to quickly become suffocating with a rush of bodies.

People struggle to move and get worn out by the heat that comes from the lack of space and you can tell by the way most attempts at crowdsurfing tonight tank, either due to people not being physically able to get their arms up, or not having the strength to do so after much movement. It's sounds hellish and dangerous, and well, it is, however it's also cathartic and an adrenaline rush, as anything that conjures up this much vigour is bound to be.

When you look to the stage, it's almost as intense as what's going down on the floor. Zach Hill is a monster on the kit, rapidly battering his minimal gear at any given time. Morin is a menacing presence from start to finish, intensely staring down the crowd whilst mechanically bopping as he fires out the racket igniting tonight's chaos. Then there's MC Ride who is a larger than life character with his ape-like vocal delivery, the way he fiercely stops and starts his lines, yet moves like a hypnotic serpent in how bendy his shirtless, ripped torso is, that is until he's rolling about on the floor, which is every bit human.

They close with 'The Fever (Aye Aye)' which is a go-to example of how Death Grips can be so aggressive, yet so hook-laden due to Ride's spitting vocals as well as mechanical beats colliding with juicier ones. Naturally, everyone uses whatever energy they have left to shout along, bounce, jump into others, anything the power of Death Grips possesses them to do.

A Death Grips show is not only an experience you'll remember for the rest of your life, but one you'll frequently be surprised you survived.