If you're remotely into underground hip-hop, noise-hop or aggressive music in general then you're probably familiar with Death Grips. The trio, completed by vocalist MC Ride, drummer/producer Zach Hill and keyboardist/producer Andy Morin, were born at the start of the decade and have put out a string of accomplished records with highlights being the vicious 'Exmilitary', the hooky 'The Money Store', the industrial 'No Love Deep Web' and last year's ambitious 80 minute long double album 'The Powers That B.' Across these records Death Grips' sound has been defined by Ride's gruff and manic delivery as well as tortured lyrics and noisy, thrashy electronic soundscapes. Wasting no time, Death Grips are already back little over a year later to further add to their already remarkable discography with newest album 'Bottomless Pit.' 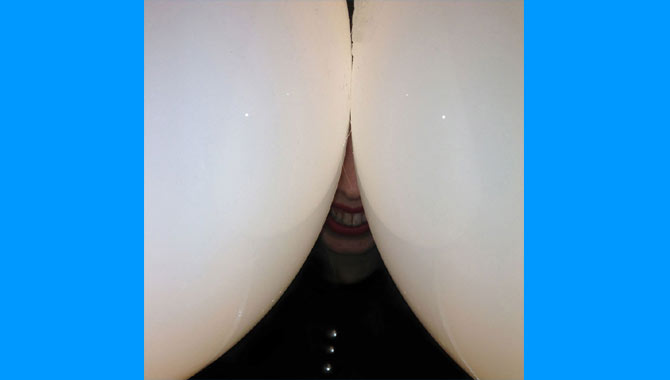 Kicking this thing off is 'Giving Bad People Good Ideas' that features a dainty, childlike vocal of the song's title coming from a female voice which is countered by speedy, battering distorted electronics and hastily yelled rapping that only a band in Death Grips' league of chaos could conjure. It's a track that shows no mercy and brands you with its brutality.

'Hot Head' feels like the deafening THX music at first, before going into the kind of stampeding beats you'd find on an old school Venetian Snares or Atari Teenage Riot record which is then contrasted to wavier, sparkly synthlines. This song was released a few months ago, but no amount of listens or familiarity can lessen the exhilaration of this berserker of a track.

'Spikes' hits the breaks a little being more spaced out, but still lively with the signature Death Grips whirlwind electronics and Ride's animalistic flow. 'Warping' slows things down even more with droning beats that flex their muscles rather than scrap at you.

So far Bottomless Pit is thrilling being the menacing Death Grips we know and love, but it's the song 'Eh' where things get really interesting. This track is warm and cuddly, or at least as warm and cuddly as you can expect from Death Grips. With playful and bubbly soundscapes that feel like a music box. Whilst there's still darkness to Ride's lyrics and some moments in his vocals he's not being anywhere as confrontational or broken as he normally does, instead being more casual, at peace even. It's easily the most shocking track on the album by being an utter delight from a band who are normally so much more vulgar. 'BB Poison' is also playful, feeling like bubble wrap being popped the way this repeated bursting sound keeps arresting your ears amongst the dizzying techno elements.

The only slightly negative thing about this album is that for a lot of it, it does seem just the teeniest tiniest bit Death Grips by the numbers. Bar 'Eh' and the speed of light opening tracks Death Grips don't really tread any new ground which is surprising looking at the huge progressions between their previous albums. 'The Money Store' was a leap from 'Exmilitary', abandoning the heavy use of sampling for their own more dazzling production then 'No Love Deep Web', despite being released in the same year was worlds away from 'The Money Store' with a much colder tone.

There is enough to make it stand out from their previous releases and what does make it special is that it feels like an accumulation of previous Death Grips records. Some tracks feel like they'd fit perfectly on 'The Money Store' like 'Three Bedrooms In A Good Neighbourhood' with its killer hook of Ride chanting 'I'm all up in my glory hole, s, o, no no no' whereas the sonically bright and easy going 'Trash' feels like it'd fit right in on the 'Nigg*s On The Moon' side of 'The Powers That B.' With that being said the whole album flows and is cohesive. If anything it's like Death Grips are hitting you with their whole arsenal and they remain as exciting as ever.

In the final trio of tracks alone there's quite a bit of diversity. 'Ring A Bell' is brawny with tough guitars that don't hog the spotlight from Ride or the electronics, but will come in and stomp in thick chords every now and again. '80808' is cold with minimal icy electronics and Ride often taking a step back from yelling, sounding more disorientated than ferocious. Then the final track, the title track, is punky with the electronics and additional guitar just jogging along, being carefree and not in too much of a rush, but fast enough to give the song a sense of urgency.

All in all, Death Grips have done it again with 'Bottomless Pit' in putting out another devastatingly good record. It may not show the band progressing leaps and bounds, but Death Grips have already contributed more than enough innovation to hip-hop and aggressive music in their short six years as a band that they can afford to release a record which, in the grand scheme of things, is just the next 13 songs for the band as that's still something more stimulating than what most other artists today can offer.