Review of Pineapple Pizza Album by Death By Unga Bunga

Taking their name from an album by The Mummies, Death By Unga Bunga are a quintet from Moss, Norway.  Formed in 2007, their debut album followed three years later and this is now their fourth release. 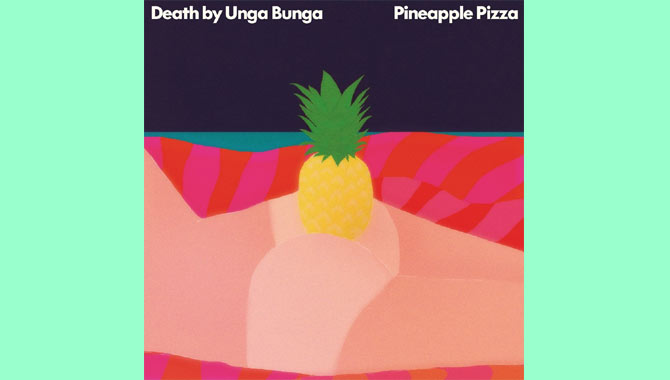 After an introductory track with a retro feel, 'I Can't Believe That We're Together' presents DBUB as a garage rock act, not dissimilar from Scandinavian compatriots The Hives - even with some howling vocals akin to Howlin' Pelle Almqvist and catchy guitar lines.  'Best Friends' drops the pace a touch, before 'I Can't Hide' recaptures the imagination, particularly with the hook harmonies.

There are similarities to the fictional band The Wonders from a Tom Hanks film - and the songs rival 'That Thing You Do' for catchiness.  Another example of this is 'Strangers From The Sky', which edges toward punk, while 'Wasting Time' is a slice of frantic rock and roll.  By the time the closing 'Young Girls' has provided another energetic blast, you've been treated to more than a few catchy numbers that are enjoyable and easily digestible.  There's a question mark over longevity for the songs, but from the perspective of instant gratification, this does the job more than adequately.