Dartz! - This Is My Ship Album Review

Review of This Is My Ship Album by Dartz!

Dartz!,
This Is My Ship,
Album Review 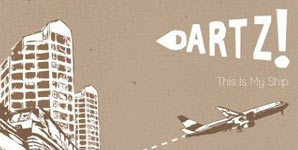 From the gritty banks of the River Tees to the exclusive hipster haunts of Hoxton might seem like an impossible journey to some, but with 'This Is My Ship', Dartz! Make that transition look as easy as finishing that last slice of Eccles cake your gran made on Sunday.

Not always the easiest of bands to get along with - more because of their ongoing genre indecision than any personality clashes. Here, Dartz! encapsulate the smooth marriage of a number of different styles and sounds to such a successful extent that you end up wondering why all bands can't just be so experimental and goddamn tuneful.

You see, that's what sets 'This Is My Ship' apart from any number of comparisons sure to be thrown their way with contemporaries both past and present. Unlike Foals for example, who seem to be stuck between a (post-)rock and a (party) hard place, Dartz! seem to be able to put all of their influences' sleeves through the mangle at once and still come up with something fresh, exciting and unique.

Perhaps their closest compatriots at present would be fellow north-easterners Kubichek! (note the use of the exclamation mark there too), and where they have the dancefloor storming radio-friendly sass of 'Nightjoy' Dartz! hit back with the equally poptastic 'Once, Twice, Again' and similarly instant 'Cold Holidays', whereby the band proclaim their love of capital cities although one suspects, not ours.

Of course it would be unfair to label Dartz! as being a.n.other band off some admittedly impressive Tyne-to-Tees-via-Wearside production line, and the incessant angular riffs of 'Laser Eyes' and discordant bassline of 'Prego Triangolos' suggest that this lot don't just think outside the box, but that they have probably never even set foot inside it in the first place.

Standing out like a sore thumb though is the funk strop of 'Teaching Me To Dance', which reduces the likes of Radio 4 and The Rapture to immediate redundancy as three Dartzmen chant "Dance is good! For your brain!" to a man over a repetitive but never annoying hookline that demands all kinds of shapes down the club.

It goes without saying that if these guys originated from London or New York, 'This Is My Ship' would be heralded as some kind of rule breaking, over-mark stepping classic. Let's hope that logistics don't prove to be a disadvantage, as this record clearly deserves to be heard from city to city and coast to coast, whatever the continent.