John Mayer - Waiting On The World To Change Audio Stream 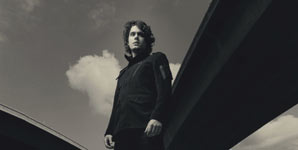 John Mayer
Waiting On The World To Change
Audio Stream

Waiting On The World To Change is the first track from John Mayer's upcoming release is called Continuum.

Combining Soul, Pop, and Blues, John Mayer's third studio album, will be released September 12. In the two years since the acclaimed release of Heavier Things, John Mayer has redefined himself as a musician and collaborator who exceeds genre boundaries. Having recorded and performed with some of the most interesting and iconic artists on the scene, Mayer returns with a pop/rock album that is the culmination of his influences, skill, and recordings to date.

Continuum is Mayer's first turn producing a studio effort, a task he shared with acclaimed studio-musician Steve Jordan. The album features sultry grooves such as "I Don't Trust Myself With Loving You," "Slow Dancing In A Burning Room," and the Sam Cooke-flavored "I'm Gonna Find Another You." Fans of the John Mayer Trio will recognize "Vultures" and "Gravity" reworked for the studio by John, Steve, and Pino, as well as a blazing display of fretwork on a cover of Jimi Hendrix's "Bold As Love.". "Heart of Life" and "Stop This Train" are new songs that longtime fans will recognize as keeping in-step with trademark Mayer material.

John Mayer Waiting On The World...

John Mayer - Waiting On The...