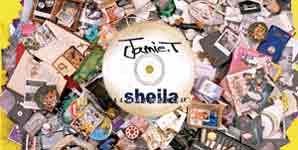 Sheila opens with an almost accapella Jamie T belting out the chorus. From the moment his voice hits your ears they'll sit up and listen. This is not UK rap as you know it, but it is rap, delivered over a backing track that owes more to Lemon Jelly than it does the beats of his hiphop peers.

The main protagonist of this tune, Sheila, will be familiar to anyone who has been out on the town in Britain and witnessed THAT girl. You know the one. She'll be staggering along, can of Stella in hand, shouting at some (wisely) long gone bloke. Maybe that's why Jamie chose the Australianism for woman as the name of his focal character. It makes her a caricature rather than a character…or maybe it just rhymes with Stella.

This will instantly draw comparisons to Plan B and Mike Skinner. Plan B because Jamie raps over his guitar and band rather than a more traditional hiphop beat. Mike Skinner because of the little snapshots of urban Britain he paints with his lyrics. But his style is very much his own and he shouldn't be pigeon-holed with the aforementioned.

"His wryly comic verse, is accessible and has attracted a great following for its satirical and observant grace." This is an extract from Wikipedia's entry on John Betjeman but it could just as easily be about Jamie T. Maybe that's the reason for a little snatch of Betjeman in the background of the intro. While he may not be a future poet laureate in the making, it will be very interesting to watch his career blossom. Prepare to be sick of him.