Review of The Final Frontier Album by Iron Maiden

Iron Maiden, the kings of Heavy Metal are set to release their 15th Album 'The Final Frontier' which now coincides with the amount of members who have been a part of this band over the last thirty plus years. 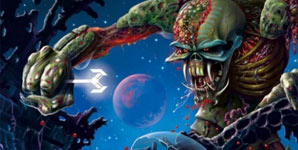 As with any big band comes the rumor mill and the album name has certainly been the catalyst of rumors that this will be Iron Maiden's final voyage and like anything, all good things must come to an end. The opener of the album 'Satellite 15.The Final Frontier' starts out with a drums versus guitars standoff, it builds up a certain amount of anticipation for the rest of Maiden's new material. The fact that this track is eight minutes long could be an indication that although this album only has ten tracks on it, it is still going to be quite a meaty record. Suddenly everything stops and the song starts up again, it seems that this track is broken up into two parts. First impressions are that these guys have still got it musically but Bruce Dickensons vocal do seem a tad weak when it comes to the higher notes, still a good tune though.

'El Dorado' is a no messing track, it is what we have come to expect from Iron Maiden and they don't disappoint in the slightest, and then the flip side is 'Mother Of Mercy' which is a bit hit and miss again with the vocal side being the let down sadly.

The one thing about this album is that everything sounds very clear, the guitar riffs at times are simply epic and colossal; this is playing your guitar with skill, aggression, blood and sweat. At nine minutes long 'Isle Of Avalon' is one of those tracks that builds itself up and up And it's of a quality we've come to expect from Iron Maiden. This is certainly Dickensons best vocal on the album, he really works his voice to the extreme.

You do have to hand it to these guys though, they have stuck to their guns and created an album only they could make. If 'The Final Frontier' is to be the last album from Iron Maiden the band leave a massive legacy behind them and this album closes another chapter in the bands history very nicely.