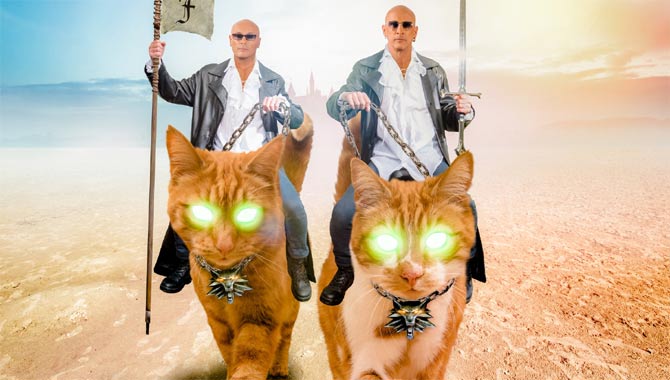 An Interview with Right Said Fred

Right Said Fred chat about the 25 year anniversary of I'm Too Sexy and talk about their new material.

It's been 25 years since 'I'm Too Sexy', how does it feel looking back on all that time passed?
Surreal to be honest, it feels like we've been around a couple of years. We've slowly morphed into elder statesmen of pop. We get these young bands at shows sidling up to us asking for advice. We've been blessed, we've played is some amazing venues, we've met a lot of great people, we look back on it with a great deal of affection.

What's the most common misconception you've faced as a band?
That we're a couple gym queens who can't play, write or sing and just got lucky. People feel comfortable within their pre-conceptions. The fact we were on the road in 1978 with Joy Division and Suicide, Rich then played bass with Bowie in '83, I played guitar for Bob Dylan in 1986, we signed to Capitol EMI in New York in 1987, played the NY scene for a year then self-financed and released an independent record in 1991 that went to number 1 in over 30 countries including the US isn't something they want to process or accept.

You've maintained success over these 25 years around the world, what would you say are the main differences between the way fans view pop here and abroad?
Abroad we don't get the 'cheesy' label. In the US for example we get racked in record shops under 'Alternative'. Also in our experience the UK is burdened by it's addiction to 'cool' a lot more than other countries. Also we've noticed that 25 to 30 years ago other countries would look to the UK for cultural guidance, those days have long gone, even the smallest territories now have a sense of self.

What has been the biggest stigma attached to RSF since your earlier hits?
Words like novelty get thrown around. We have no problem with 'novelty' as it actually means 'new', 'original' and 'unusual'. We know it's meant as an insult but you can't legislate against stupid. The indifference towards us use to bother us but now that indifference is dwarfed by our own indifference to it.

Do you still get recognised for 'I'm Too Sexy'?
Yes, all of the time. It jumps generations in leaps and bounds, we do autographs and photos for a whole range of people. I think also the fact it's been used in so many TV ads, TV shows and movies on a regular basis for 25 years it's maintained an omnipotence few songs enjoy.

What has been your career highlight over the years?
The FredHead campaign we did for GOSH was amazing, a humbling and life affirming experience. Being awarded two Ivor Novellos and having them included in the PRS book 'A Century Of Song' is pretty cool. In terms of performing The Brandenburg Gate in Berlin in 2014 in front of 500,000 people and also The BollyWood Awards were mind blowing, that had a TV audience of 300,000.000. Meeting artists that we've always admired and them being complimentary about us is very special.

Is there anything you still want to achieve in music?
Yes lots, we just love writing, recording and playing live. We don't have any 'collaboration' desires, just to keep working and to enjoy it.

What are your plans after the 25th Anniversary?
The new album 'Exactly' will be released in early 2017, we're very keen to take it on the road. We also have a new health drink we're involved in, we expect to see that in the shops during 2017.

When can we see you live again and what can we expect from the live show?
We'll be out and about in 2017, it'll be a brand new band hopefully including a couple of female musicians. We hate rehearsing and pre-production, that said we want to come up with a couple of curve balls. We always play with a lot of energy but we are also looking to add to that in some way.

Finally, what would you say to pop fans of 20 years ago who still think of you as 'that band' who released 'I'm Too Sexy'?
We'd say "see ya, we don't have time to waste explaining what was"!