As far as band names go, Hospitality is one that resonates with a sense of warmth and welcoming. Their sound too greets you warmly, it is distinctively poppy indie occupied with a summery memento. Hailing from the Mecca of indie groups, the Brooklyn trio's self-titled debut is a vis-.-vis of a twenty something's ennui ridden life. Now approaching her 30s, lead-singer and songwriter Amber Papini writes in hindsight of the 'glory years' with a flippant tone, dismissing past loves (and inevitably losses) and a parsimonious lifestyle. 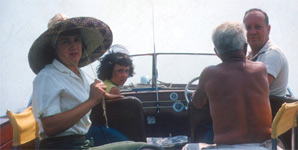 The subject matter may not be the most upbeat, nonetheless this is a fun album; Papini's vocals are fun to listen to and the band sound as though they genuinely enjoyed themselves during the record. Opener 'Eighth Avenue' kick starts the album in a Camera Obscura-esque, elated ballad style that cannot help but bring a smile to your face. As the song draws to a close the acoustics are dropped as the song is invaded by an onslaught of erratic guitar fuzz, setting up the rest of the album nicely as the next track (and lead single) 'Friends of Friends' is unabashed guitar pop. The retrospective lyrics are rained over by afropop melodies and grooved out drumbeats like a Skittles storm; they are colourful and vibrant, with the album having a brazen holiday feel. Just look at the front cover, it is a throw back to summer holidays with family. Papini's lyrics may be fraught with themes of disappointment yet the musical backdrop juxtaposes this ideally as it transports you to some not-too-distant beach.

Some of tracks are reworks of past tracks, they have been floating around the music scene since 2008, and rather than sound reworked they instead sound like they've been polished with the whole colour spectrum to draw out the warmth of each of the tracks. Initially from their first EP, also titled Hospitality (no marks for originality then) the most apparent improvement is on the track 'Betty Wang,' which compared to the original have been given an all new lease on life. Rather than sounding as though it was recorded in the corner of a garage, it now sounds as pristine as it should do. Some songs do sound better without the coat of gloss, at their most raw and lo-fi, this cannot be said for any of Hospitality's songs as a stripped down approach takes away the sunshine that makes the trio so enjoyable.

The album is not without its charm, sure we've heard this kind of album before in the past numerous time yet the group make this a much more personal affair than so many other guitar-based indie pop bands. The real charm lies with Papini, her lyricism is wistful yet maintains a sense of buoyancy. If it takes less than four years for their next release then Hospitality will be around for a lot longer than a number of Papini old flames, and deservedly so.