Review of Doncamatic Single by Gorillaz

Who would have thought that four animated figures could sell over 20 million records worldwide? The musical project created, by Blur's Damon Albarn, has been storming the commercial music scene for over 12 years now and it really feels like it hasn't run out of steam just yet. Featuring British singer Daley, Doncamatic, is the fifth single from their Top 5 album Plastic Beach. The result is a bouncy and lighter offering from this band. 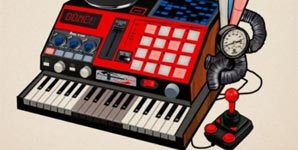 Imperial and electronic, Doncamatic, as its illusive title suggests, is a journey into the unusual and bizarre. The song starts off with no distinct clue of where it's heading but then we experience a sensually charged chorus that captures the eardrums. With a great regal melodic backing, Daley's soothing vocals smooth along, but one may argue that they are not pushed to the limits. This single is definitely a much lighter and commercially 'poppy' sound in comparison to previous material released by Gorillaz, but that is hardly a bad trope. The brilliantly capturing middle 8 is something that has to severely be acknowledged, whilst the Gorillaz prove that they harbour a brighter side as well.

Whilst this is, by far, not one of Gorillaz' greatest singles and therefore more likely not going to be regarded in the future as a classic, there is no doubt that 12 years in, Gorillaz are still making some decent music. Always sounding slightly eccentric and never being accused of sounding generically vague, Doncamatic proves exactly why the Gorillaz have still retained their justified place in the public psyche. Prepare to be 'all played out' on this one.