An entertaining film about sobering true events, this is the story of notorious screenwriter Dalton Trumbo, who defied McCarthy's communist witch-hunt hearings in the late-1940s and was blacklisted by Hollywood for more than a decade. As written by John McNamara and directed by Jay Roach, the film is bright, funny and emotionally resonant, clearly simplified to make it more involving. And with such a terrific cast on board, it's both revealing and a lot of fun. 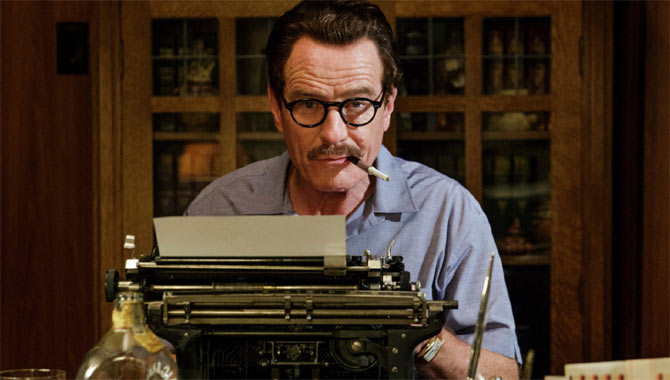 In 1947, Dalton (Bryan Cranston) is the film industry's top-paid screenwriter, so of course Senator McCarthy's House Un-American Activities Commission goes after him about his rumoured links to the communist party during the war. But he and nine fellow writers refuse to testify, so they're imprisoned for contempt, denied work by the Hollywood studios and targeted personally by the powerful gossip columnist Hedda Hopper (Helen Mirren). To survive, Dalton begins writing under a series of pseudonyms for the B-movie producer Frank King (John Goodman), creating a script factory in his home with the help of his wife Cleo (Diane Lane) and daughter Niki (Elle Fanning). Two of these screenplays win Oscars, and it isn't until Dalton begins writing Spartacus in 1960 that actor Kirk Douglas (Dean O'Gorman) breaks the studio blacklist.

Roach directs this story in a sunny, snappy way that includes lots of smart wordplay and a clear sense of the us-or-them mentality that has defined America since the Cold War. People need a villain to hiss at, so anyone with even a passing connection to communism will do. And Mirren hisses better than most. Her performance is riotously funny and relentlessly nasty at the same time. More textured characters include Louis C.K. as a fellow writer and Michael Stuhlbarg as conflicted actor Edward G. Robinson. All of the actors are excellent, anchored by Cranston's wonderfully prickly Oscar-nominated turn as a bullheaded man who hilariously seizes every opportunity to make an inspiring speech.

This period isn't Hollywood's finest moment, so the film's jolly tone sometimes feels like it obscures the true darkness of the situation. But it also makes the movie relentlessly entertaining. Unsurprisingly, the script paints the pandering media and the hawk-like government as the true villains, then finally acknowledges that it took several decades for the studios themselves to finally redress the balance. Trumbo did eventually get credit for his Oscar-winning screenplays for Roman Holiday and The Brave One. But the movie industry is still caught up in controversy over its lack of diversity regarding race, gender, sexuality and, yes, political views. So the film also feels like a necessary wake-up call.

Watch the trailer for Trumbo: