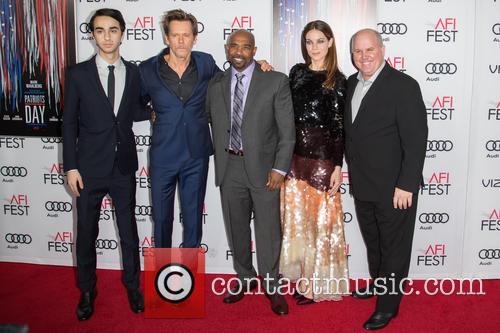 I Saw The Light is the new biopic about Hank Williams. The film follows his personal life and rise to fame and his tragic death at the age of 29. Having released 30 singles in a very short amount of time Hank Williams became one of the US's favourite musicians.

Having begun work in the music industry recording tracks for a radio station, eventual turn of events and the war led Williams onto starting a solo career. Both his mother and his wife played a huge part in his musical success with his wife Audrey initially managing him which led onto Hank being signed to MGM Records.

Hank always wished to be the best father he could to his child, but constant time on the road, an addiction to pain medication, alcohol topped with his promiscuous ways lead to an unstable home life, despite the wholesome image the outside world had of him.

Continue: I Saw The Light Trailer

Alton is a very special young boy who has been given a unique gift. When his father, Roy, finds out that Alton is in trouble with his freedom - and life - in jeopardy, Roy takes matters in his own hands and kidnaps his son. On the run and being hunted by religious extremists and special agents, Roy takes to the road with his close friend in order to protect his son.

Jay's lived a less than honest life, sleeping around with women he could never care about, fritting away money he doesn't have in casinos and at races and drinking away his problems every night at seedy bars. However, when he meets Daisy, a mentally unstable but harmless young girl who has lived virtually her whole life indoors sheltered from the harms the real world can bring, his life begins to change and he endeavours to take her along to his wealthy parents' house on the weekend of his brother's wedding to prove to them that he can change his ways. Having never tasted a drop of alcohol in her life, kissed a boy, gone to school or owned a pair of shoes, Daisy also sees her life turn into an adventure as she seemingly becomes the only one who can change this man's stony heart and force him to love her.

War Of The Worlds Review

By byline.gif
OK
Steven Spielberg's huge-budget update of "The Warof the Worlds," H.G. Wells' seminal alien-invasion novel from 1898,is a problematic blockbuster with one essential saving grace: It's profoundlyfrightening in a way that few directors have the talent to capture.