Elvis Costello is one of those men who is quietly beavering away all the time releasing a barrage of material under various guises so that you're never able to definitely declare you've heard every version of every song he's ever done; there's just too many. He's even been on Sesame Street. 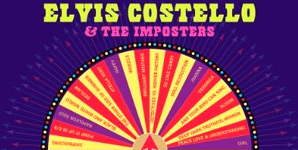 His newest record with The Imposters though is not so quiet; instead, it delivers a live and loud fast frolic through 16 songs of upstanding stature. Never content to fall short of the mark, it's accompanied by a live DVD of another 16 songs and if you're lucky enough to not get a review copy-which I can only assume is all of you-then you will receive some extra goodies including vinyl, signed cards, and a 40 page hardcover book all wrapped up in deluxe packaging; topping it all off is the exclusivity of this limited edition product. So obviously, it comes with a hefty price tag attached. In fact, the man once described as a pop encyclopaedia has recommended that his fans don't buy this collection and he ought to know something about it. Not that my humble opinion matters so much anymore but I'm inclined to agree with him.

Recorded over two nights at The Wiltern in L.A last year, we see Elvis joined by not just his backing band but the likes of The Bangles as he powers through some classic hits including 'Watching The Detectives' and 'Mystery Dance', as well as songs like 'National Ransom' from his most recent studio record. It was a big tour of America and in a revival of his 80's heyday, he allowed his set list to be chosen by - you guessed it - the spectacular spinning songbook, which is a marvellously original idea which others should adopt but could also explain the exclusion of some of his finest songs from his finest records. If I went to watch Elvis Costello live I'd expect to hear 'Less Than Zero' and 'Alison'. That though isn't the problem with this collection; all his songs are good so it doesn't matter that much what he plays. Sadly the sound quality does matter and it's not very good.

The whole record is bass heavy and on the more furious numbers like 'Stella Hurt', the feedback takes over relegating the vocals to the back of the mix. Not to beat around the bush or anything but it's vocals and lyrics that you want to be able to hear in an Elvis Costello song. This normally would be something you can get over but at this premium price, you aren't wrong to expect decent production. You could buy a lot of his records for this cost and experience better songs in better quality. That though is the CD where you expect only the highest quality recordings; a live DVD though is a completely different matter.

With a special introduction where the fine gent tells us his name is Napoleon Dynamite, the experience of a Costello live show is thrilling from beginning to end and this DVD captures that in all its kinetic glory. The live version of 'Clubland' chosen by unsuspecting and ridiculously lucky every-man Matthew is a particular high point, showing the entire bands musical prowess with glorifying moments of improvisation. His show is bright and brash like his personality, which is in full on vaudeville fashion this evening. He's charming, witty, stylish and the friendliest man on the planet. He even has a make-shift bar on stage with him and The Bangles of course, because who else are you going to get to do the Go-Go dancing?

What his record lacks his live show more than makes up for and this will make you wish you were in L.A that night. If you thought the man may have been starting to lose it then you're wrong and he will prove you so, as he navigates the smiling crowd during 'God Give Me Strength'. Costello isn't just an encyclopaedia of pop but one of music's most dedicated and important icons, so while this isn't even worth it for the die-hard fans I'd urge you to pay the price of a ticket and watch the man in action if he ever tours within a 1000 mile radius of you. Till then, get working on his extensive back catalogue.