It's always strange when music makes you imagine a certain object or place in your mind, when it reminds you of a time, or a place, or an object so strongly it's like it was yesterday. This is something that Dutch alternative rockers have managed to capture very well with their latest offering, Machinery. It's full of energy, ideas and a whole lot of imagination, like De Staat have taken the conventional idea of an album and asked themselves exactly how much they can do that's away from the 'norm' and still manage to get away with calling it music, rather than just a cacophony of random noises. 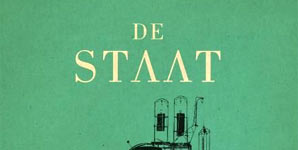 One of the main words I would use to describe this album is "unorthodox". Right from the offset there are lots of sounds used that one would not expect to find on a general, run of the mill mainstream album - sounds such as, on the opener Ah, I See, the use of an air horn blasting out a short melody that one would normally expect to find at a international football match, and also the use of various farmyard noises within Old MacDonald Don't Have No Farm No More, and it sounds like they've used an assortment of random pieces of metal or have hit a fence to make noise in the background of Back to the Grind. It's weird, but once the listener gets over the fact that it's slightly odd, it actually works surprisingly well.

However, due to this, the album might not be to everyone's taste. Those who would hold up 'conventional' sounds of music, i.e. just using instruments and vocals to put songs together might not appreciate the thought that went into putting the album together and the amount of, to coin a phrase, 'thinking outside of the box' that De Staat have obviously done when writing. From this it could be said that De Staat might be aiming their album at a very specific audience, and not catering to a larger proportion of listeners. It depends on their intentions but this might limit the success of the album.

Positive points: the sounds within the songs on this album feel almost thrown or pieced together, but not in any kind of bad way. The album reminded me of a well oiled machine or a factory. It sounds industrial and metallic. It seems like the songs have been put together in a factory - assembled, in a way. Each aspect of every song is prominent in the recording, as if all of the pieces have been made to fit together, and that all of them have a specific role to play within the entirety of the song. With that, the title Machinery seems very appropriate, as it could be interpreted that each song is a machine within the 'factory' of the album that has components to make the whole work properly. The influences from other bands such as Queens of the Stone Age are prominent, but not particularly obvious as the sound is so different to most other things. Lyrically, it seems quite political - Sweatshop especially so, and Old MacDonald Don't Have no Farm no More could be a reference to the fact that society is moving towards a more industrialised era, and also playing on the idea of the title of the album, Machinery.

This isn't an album that is all about the vocals. The singing isn't at the forefront of the sound throughout the whole, and the listener doesn't seem to be expected to listen to it more than the music, but is instead encouraged to listen to the music in the background just as much as the vocals, probably due to the fact that so much effort has obviously gone into making the music so different to many other bands.

Overall, De Staat have managed to create an extremely innovative and different album, one that may not be to everyone's taste due to its 'different' nature, but one that everyone can at least appreciate for its imagination and thoughtfulness. In a way, it's a shame that some people might not find this album to their taste, because, below the surface, it's very cleverly done. One of the most pleasing things that I found, is that I didn't want to skip any of the tracks. It sounds strange at the first instance, but when you go to change the song, or to turn it off and put something else on, you find that you actually quite like it.