If Air Castles really wanted to shine a dreamy beam of sound for everyone's positive judgement, they should've picked a less obvious album title; one that doesn't lack an incredible amount of imagination as 'Lights' does. How many artists have used that one? There's Ellie Goulding and Brigade among others who have claimed the inspiring title for their 'inspiring' works. If Air Castles had picked a better name, then this album may have sounded a bit more attractive from the start. 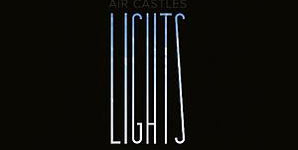 Opening track 'Gold' is just as it's described (this one is a good title for the track, but again definitely used before). It's like Snow Patrol crossed with Mumford and Sons. The epic chorus and louder sections have an alt-rock feel, yet the tickled drums and the patches of acoustic guitar calm the chorus down for a folk-ish tempo.

In the limp handful of decent tracks here, this is one of them. Last song, 'Worlds Apart', closes the record with the same elements, but pretty much everything for the half an hour in between sounds a bit dull. Just like most of Snow Patrol's and Mumford and Son's album tracks, they are so sheltered in non-single and filler territory, they never get an airplay and are forgotten about.

'Our Careless Joys' brings a slither of excitement to the quiet party ('get together or gathering may be a better occasion for this to be played at') in the intriguing interlude just over half way in. It's almost a little too funky in its ducking bass and chiming riff that creates a buzz for 25 seconds. 'Falling To Pieces' features some credible samples in attempt to engage you and it'll probably only hold your attention until the unsurprising and cheesy words of, 'I'm falling to pieces again.'

Though, there could be a crackable code in working out why this is so monotonous compared to the 2008 EP, 'Night and Day' (look at that for another amazingly unusual title). It's taken Swedish-born singer-songwriter behind Air Castles, Max Mansson, four years to construct a debut. The EP was actually very good and given gleaming reviews of hope for a next big thing. But maybe four years is too much thinking time when writing a record. Many greats say that the best songs are written in hours, not years, so perhaps this was Mansson's downfall on 'Lights.' As seen in the past and in a (very) few glimmers on here, there's no doubt that Air Castles can write a song, but it's just not always executed in a charming manner that it desires to be.