Review of Live and On Acid Album by Abe Duque

For a man who once released a record once called So Underground It Hurts, Abe Duque (That's pronounced "Dook" by the way) is very busy letting his public know he's still there. A veteran of the NYC live circuit since before you were out of Pampers, the Ecuadorian-born perpetrator of classics like Champagne Days, Cocaine Nights earned his dues way back in places such as the notorious Limelight club, a hub of the kind of debauchery which is hard to find in Manhattan these days. 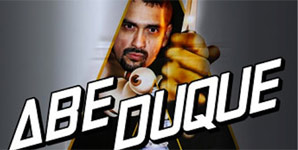 DJ dive deck wrecking CV for the purists then? Tick. Yellow Cab load of street cred? Yo, like, for sure. With the hirsute Mr.D now accessing all our areas, it's now appropriate that we dive straight into Live And On Acid (Don't worry, I'm sure he's just got a touch of indigestion, worried parents)
a double release which is designed to create a similar effect as when you get those little swirly patterns of light in your eyes if you look at a naked lightbulb for too long. I mean like, for more than two freakin' hours man.

It's split into two self contained acts, the first weaving a typically Alice-In-Wonderland type journey down the rabbit hole of Duque's work as artist and remixer, all spliced together in that way those clever deejay types do without any gaps and delivering an experience which is funky, deep and tribal, if in places a little claustrophobic. For those of you unfamiliar, the main vibe is provided courtesy of our friends at Roland, via their legendary TR-303 and 909, along with that other old favourite, the ring modulator, plus a ton of discombobulated voices that sound like they belong to someone with a very nasty head cold. As an archetype it's rendered to perfection on Duque's own Big Bomb, Chloe's Take Care and Jacksonville's Dusk, but there are brief flashes of light in the murky canopy, provided mostly by the warm ripples of Jon Virtue's latin-overtoned Breadsnapper.

The second effort is made up of Limelight classics, a feeling that can't be recreated in person any more now the old converted church has been turned into an upscale mall, but you can still pretend that there are transvestite dancers suspended in cages in the privacy of your own bedroom if that's what floats your boat. Our host wheels out the classics; Fingers, Inc.'s freaky chanting soul on Distant Planet, Underground Solution's stone killer Luv Dancin' and Logic's pristine house staple The Warning', all acting as reminders of a blinder for people who most likely have absolutely recollection of what they had for breakfast these days.

I have to admit it's a bit of a stretch to think that punters, no matter how messed up, would stand around listening to the three minute spoken word ramble/preamble to the penultimate track, Air Liquide's Liquid Air, despite the insistent alien squelch it eventually works itself up to, but Nu Yorican Soul's jazzy, break heavy closer The Nervous Track brings back the party vibe in a wide eyed, what time's the last subway to Mosholu Park kinda way. And you get the feeling that The Dook kinda likes it down there in his own little underground.

Abe Duque - Live and On Acid