Old Volcanoes takes its cues equally from a mixture of Britpop and mid-90s US college rock, so whichever way you slice it, it has come to the party about 15 years too late. Nevertheless, what this new project from ex-Test Icicles man Rory Attwell offers is a mixture of incredibly poppy moments and discordant, strange flashes. Overall, it is thoroughly different to a lot of other indie bands out there at the moment, and is most definitely worthy of a listen. 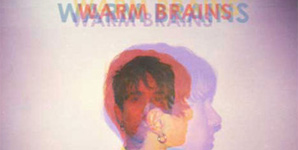 The album starts off with Worried Seed, a slow burning album highlight. The song ebbs and flows beneath washes of organ and ringing guitar chords, which combine to make this a sinister introduction. After this is Old Volcanoes, which has the influence of Blur stamped all over it. It is a much more conventional indie pop tune, but this does not make it any less entertaining than Worried Seed.

There are many more irresistible pop gems scattered throughout the album, such as Drunk Drivers and Painting 2ft Tall Lines, but there are also a few songs with a huge influence from the likes of Pavement or The Fall, such as Let Down and Marble Arch. These songs are fairly hit and miss. Where Let Down is probably one of the albums highlights, Marble Arch, and especially Hit the Floor just seem like experiments in clattering noise.

Although you have to respect Warm Brains for going out of their way to create something much more than just your standard run of the mill indie record then, it has to be said that it is at best, a 50-50 record. There are some great moments here (Let Down, Worried Seed, This Salt Makes Us Sick), but also a lot of filler (Hit the floor especially). It is an obvious homage to its influences in places, but Old Volcanoes is just an OK effort.