Review of Bustin' Out 1983, New Wave To New Beat Album by Various Artists

Bustin' Out 1983 is the third release in a series of compilations exploring the diverse spectrum of eighties influences. Compiled by Mike Maguire, the albums aim to explore the depths of the key era in electronics. 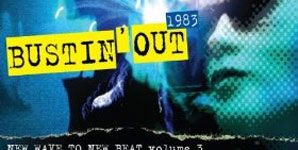 By the eighties, electronics were widely used across music as equipment became cheaper. So by 1983 we had hit a sort of popularity and room for experimentation and culture contrast. Bustin' Out showcases perhaps the less popular mainstream offerings, and focuses on more experimental. For example, New Order released 'Blue Monday' in 1983 which became a huge success, but the New Order track here is 'Your Silent Face' (still with that inherent New Order sound though).

So what do these tracks stand for if they are not the best of the year? I would love to know the thought process when putting this selection together, but it has to be progression and education. You can listen to this album over and over again, and the more you listen, the more you detect influences adopted by other artists of the eighties. Not just the eighties though, we are currently stepping back into electronics, but with current technology and development. The fact is that the backing for many of these tracks would not look out of place within current albums by artists such as Editors or Mark Ronson. It's the vocal where you see a sense of being outdated, where the electronics sort of out rank vocals and they almost don't always sync together.

Top marks to New Order for 'Your Silent Face' a chilled electronic synth with a slow and steady deep beat. Another well chosen example would be Laid Back with 'White Horse' for its unforgiving bold statements to create an impact using what appears to be such simple logic.

You have to be a real eighties electronics fan to get this, we're talking way before the electronic dance of the late eighties, and there aren't that many hooks. It takes time, patience, and understanding - It deserves all of these. For an educational trip through the eighties and electro music, the Bustin' Out compilations are way up there with the best.