Regina Spektor could be described as this generation's Fiona Apple; a female artist producing emotive, slightly off-beat music that doesn't adhere to the commercial norm. It is these elements of eccentricity and fearlessness that have garnered her a devoted fan base which has followed her career up to this record, What We Saw From The Cheap Seats, her sixth studio album release.

One of the great things about Regina Spektor's vocals is the fact that she can switch between varying pitches and tones so effortlessly, flitting through ranges like a bird singing in the trees. This is reflected in opening track 'Small Town Moon', providing a quintessential taste of the Spektor sound for anyone new to her music and welcoming back in with kooky arms those already more familiar. Regina's trusty piano accompaniments feature from the first key, initially lulling us into steady melodies before bursting into colourful, bouncing choruses with handclap beats and catchy stop-start rhythms.

Beneath this quirky exterior, however, lies a fragile woman who is just as vulnerable as the rest of us. 'Firewood' is a mesmerizingly beautiful song that is stripped of any of her recognisable instrumental or idiosyncrasies. A soft, slow harmony backs emotive lyrics such as, 'But a heart can't be helped/ And it gathers regret' and 'Everyone knows you're going to love/ Though there's still no cure for crying'. Continuing this sense of fragility is 'How'; a heart-breaking ballad in which Spektor sings of the pain of a break up. Listening to these two tracks, you do momentarily wonder if Regina is veering away from the whimsical touches that have made her so recognisable, but, if anything, they merely demonstrate that the songstress is far from being a one-trick pony.

'The Party' and 'Jessica' round off the album; two whimsical ditties resonant of Spektor's previous work affirming the fact that the Regina we all know and love has produced another wonderful set of songs that will delight fans both new and old alike. There's nothing particularly ground-breaking on this record, but the view from those cheap seats is still really rather good. 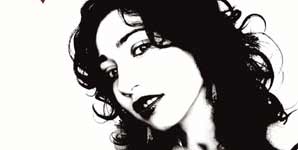