Review of Its Never Been Like This Album by Phoenix 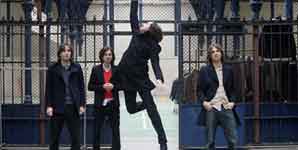 You have to admire a band whose press release begins with the statement, Phoenix are one more time into extreme relevance. That's exactly the kind of skewed translation that intends-to-sound-entirely-innocent-yet-comes-off-sounding-full-of-threatening-bravado that I like. Phoenix are (as I am imagining their biographer is), French. The short biography that follows that almost Zen-like intro is reassuringly oblique yet sadly another case of a record company press department trying their hardest to make a record sound more important and interesting than it really is. Bollocks.

When Phoenixs debut album 'United' appeared to little fanfare, in the UK in 2000 I was working in a record store and spent many hours blasting it over the shop PA trying to do my bit to spread the word about this mysterious 4-piece band from Versailles. I thought it was so great, particularly for its stubborn refusal to be pinned down to any particular genre. In retrospect it was probably this very thing that caused the album to be largely ignored, especially in the absence of the big hit. A second, fairly sterile album followed in 2004 accompanied by a couple of little hits but still Phoenix failed to gain the recognition they deserved as being one of the great outsider bands of their era.

Which is why I'm disappointed to report that their third album 'Its Never Been Like This' sounds lifeless and dull and sees the band drifting ever further away from the eclectic diversity of their debut. The band apparently took the notoriously risky approach of writing the album in the studio as they went along, striving to achieve the feel of a proper band playing together as opposed to the slick studio-crafted vibe of the first two records. This hasn't really worked out for the best as the songs are really quite unremarkable and the stripped down production doesnt do them any favours. They've cleverly tacked the two best tunes (Napoleon Says & Consolation Prizes) at the beginning of the album however the eight that follow cause the album to become blurred and unfocused and ends up sounding bland and effete. It's a real shame that Phoenixs fantastic debut will not be judged fairly in the pop music history books based on the vapid, lacklustre mediocrity of their subsequent records.