2013's been a year filled with great music but, at times, it has felt like you've had to search it out.

It's been a year of truly brilliant sounds even if there may have been a few disappointments along the way. Take hip hop, for example: unlike 2012's records by Kendrick Lamar and Macklemore & Ryan Lewis, there was nothing that really demanded your attention. Yes, Kanye's album 'Yeezus' was technically brilliant, but it's a record I'm still struggling to digest properly. Similarly, Jay-Z's 'Magna Carta, Holy Grail' (which, in my opinion, is as good as West's effort) was less immediate than the likes of 'Blueprint 3', which means it's got somewhat lost in the public consciousness.

Both those records had an interesting release as well, materialising on shelves seemingly from nowhere. They're not the only ones either; My Bloody Valentine's 'mbv' appeared online out of the blue in February after a gestation period of 20 years. Equally, Mazzy Star, Boards of Canada, Nine Inch Nails and David Bowie made unexpected and impressive returns following long hiatuses. There were also some great reissues and live records; Rilo Kiley's 'Rkives' acted as the epitaph the band deserved, Bob Dylan repainted his self-portrait with the 'Bootleg Series' and revealed songs well worth revisiting, Steve Albini finally got to share his vision for Nirvana's 'In Utero', The Velvet Underground's 'White Light, White Heat' finally got the deluxe treatment it deserved following Lou Reed's sudden death and Neil Young presented what could well be his best live album to date with the 'Cellar Door' addition to his archives series. 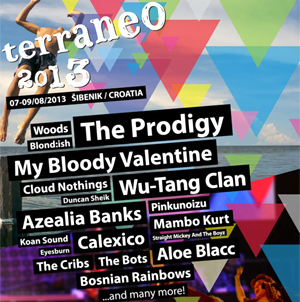 Continue reading: The Hop Farm Bounces Back From Administration To Announce My Bloody Valentine And Rodriguez As 2013 Headliners

Twenty-two years may have passed since My Bloody Valentine last released an album (1991’s Loveless) but the band have not lost their ability to whip music critics into a frenzy. Writing for The Telegraph, Bernadette McNulty comments that the strangest thing about reviewing a MBV album (entitled mbv) in 2013 isn’t the fact that there’s been 22 years of silence from the band but the fact that - in order to review it ahead of its release – she’s listening to the music via digital files. My Bloody Valentine are one of those bands that almost embody the allure of vinyl (and fear not, MBV devotees, the album is available to purchase on vinyl) and a the bewilderment of a digital MBV experience becomes the focal point of McNulty’s review.

Dudley Colley’s blog post, republished by Huffington Post, approaches the album with trepidation yet finds, with some degree of surprise, that it’s actually rather good. “I'm loath to even describe much of the rest of the album, simply because every listen is leaving me a little more in awe, and I don't want to try and pin it down yet… like the LP just falls into place at the beginning, it similarly just falls out of place at the end.”

Our own reviewer, Jordan Dowling gave the new release an impressive 8/10. In comparison to its most recent predecessor, Dowling writes “Inevitably with such a diverse palette the cohesion of Loveless is forsaken, but mbv is all the better for it. It is not necessarily a stronger record than Loveless, but it is certainly better than what Loveless Mk II would have been.” The message is clear, then; mbv is well worth your pennies, just make sure you splash out for the vinyl, for a true MBV experience.

By Jordan Dowling in Music Reviews on 05 February 2013

Let us from the offset ignore inactivity, as My Bloody Valentine's follow-up to "Loveless" holds no regard for it. It begins two decades on as if nothing but the turn of a page has occurred since the release of their landmark second full-length, and sees them depart from familiar grounds into brand new territories (for themselves).

'she found now' submerges Spector's Wall Of Sound at the same depths as 'Sometimes' on its' predecessor, but as it progresses "mbv" finds the Irish quartet moving further and further away from the trademark sound of their peak, like the greatest hits of a catalogue that never made it past the confines of a studio.

Nothing sums up "mbv" better than its' artwork; it is an incomprehensible clusterfu*k of indecipherable shades and shapes when viewed at a distance, or indeed presented on a low copy, but under close study it reveals itself in multi-dimensional glory. Still it is a work of such scope that it is nigh on impossible to summarise efficiently and effectively, a point to note in these days of instant music criticism

1 2 Next »
My Bloody Valentine