As 2014 approaches, Joe Wilde unveils the most listenable releases of the past year.

Hookworms 'Pearl Mystic' - Few albums released this year let you step inside to a whole new world of colour and sound as 'Pearl Mystic' has. The Leeds band's immersive debut might not be for everyone, but those who like what they happen upon in the 'Pearl Mystic' landscape will no doubt struggle to forget what they've seen.

By Joe Wilde in Music Reviews on 26 September 2013

Joanna Gruesome are a Cardiff-based 5-piece who play noisy, distorted pop music. They are not, as some may assume, a Joanna Newsome punk rock tribute act. Their first LP, 'Weird Sister', is their welcoming message to the world, and the message is a short, sharp cry of youthful exuberance, angrily packed into 30 minutes of sheer brilliance. 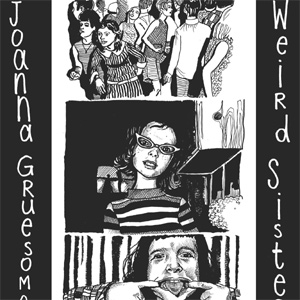 Consisting largely of older, remastered singles with the help of MJ, frontman of the quite exceptional Leeds-based Hookworms, their welcoming message might be familiar to the group's faithful fan base, but to those who are listening to 'Weird Sister' as their first bit of exposure to the group, it may just be the kick in the ears that your musical needs require. Their sound is a hardcore, pop sensation that moves at break-neck speed, but never skimps on the melody or a catchy hook. With front-woman Alanna McArdle at the heart of things, her screams, shouts, and sometimes beautifully melodic singing voice guide the Gruesome ship through jagged waters, orchestrating the stomps and thrashes of the rest of the group. Her shifts between ferocity and harmoniousness are matched each time by the group, with the album alternating seamlessly between visceral punk; kick started by a burst of noise, and perfectly structured pop helmed together by McArdle and (sometimes) guitarist/vocalist Owen Williams' singing. There's so much packed into one place, the album genuinely carries a sense of unpredictability with it that stays with you even after you've played it well over the double-figures mark.

If it wasn't for the wonders of the iTunes song descriptions, it would be hard to know when one song starts and another begins, as the songs blur past in the blink if an eye, each one as fiercely infectious as the last. This isn't to say that the songs lack any kind of individuality, there's a lustrous fluidity to the album that helps the tracks merge together so well. The stuttering, fuzzy album opener 'Anti-Parent Cowboy Killers' in which McArdle floats likes a butterfly before the whole track stings you with it's infectiously aggressive drum crashes and false guitar solos, flows into heavy as a jackhammer 'Sugarcrush;' a song that sounds like the illegitimate lovechild of Dinosaur Jr. and The Vaselines. Things get much quieter by 'Wussy Void,' with its metronomic guitar trickling into your ears before he next explosive burst of the chorus, which leads us on to the simply explosive 'Madison.' What makes 'Madison' stand out as one of the album's best tracks though is McArdle and Williams' inspired unity on the mic together. That, and the insane build to the warped solo.