By Lauren Mullineaux on 07 September 2015

Review of Eyedom Album by We Came As Strangers

After two well received albums We Came As Strangers have made a name for themselves, and their third, 'Eyedom', pushes them ever closer to their trip-hop brethren. 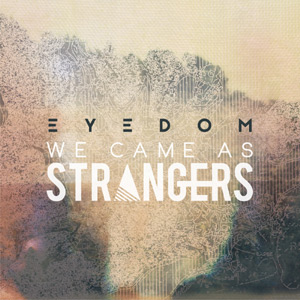 The dynamics of We Came As Strangers are interesting, they meet up once a year to write and record all their albums in two-week intensive sessions, which makes for some uniquely raw material.

While tracks like 'Adrenaline' inject just that with its blitz of pure pop-rock guitar and keys, nothing is over-produced here and the undercurrent of strings add the classy touch we've come to expect from them. Here the album takes a turning point from the quiet otherworldliness of title-track 'Eyedom' which demonstrates their knack for a post-dub beat. It's easy to compare them with Massive Attack or Portishead and the scratchy palpitating heart beat of 'Still Life' only furthers this connection, but 'Eyedom' doesn't come nearly as close as 'Shattered Matter' did and this record gives the impression they're trying to keep their sound as genreless as they can.

Ellem's voice is at times achingly beautiful and, while lyrically this album isn't breaking new ground, there are some light-bulb moments. One such moment is on album closer 'Carousel' which is a jangly metallic ode to repetition that lets Justin Sandercoe shred as Ellem's accented purr remembers: "Grab a coffee down at the corner shop//where the year before little kids got shot." Despite the lyrical lacklustre, the vocals themselves are utilised well within the mix often adding a sense of intimacy or show of force to the music.

Largely arranged by keyboardist Owen Thomas, the percussion on display here is a masterclass in programming, it's mesmerizingly militaristic on 'High Coming Down' before bursting into a flurry of Cuban activity and is executed perfectly.

All are masters of their craft here and that comes across clearly in the individual elements of the tracks on display, but as an album 'Eyedom' just isn't cohesive, there's too much happening here and you leave feeling like a stranger to their sound.