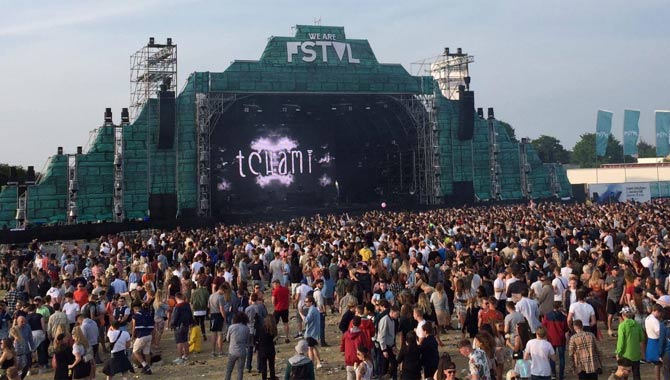 The second part of the festival saw Craig David presents TS5 bring his chart topping success to We Are Fstvl. Craig mixed tracks as well as singing both covers and his own releases including recent 2015 success When the Baseline Drops featuring Big Narstie. Tracks such as TLC 1999 release No Scrubs which got the audience singing along on a Sunday afternoon as well as Rihanna's recent release Work was covered brilliantly vocally from the garage artist. Craig played throwback track 7 Days from his 2000 release Born to Do it which gave the singer recognition with his versatility mixing old school with R&B.

DJ Snake's was the warmup act for Steve Angello and his set was a little uninspired, it often felt  messy and didn't manage to reach the levels of Tchami who got the crowd into a frenzy as the sun was about to set. The French DJ played critical acclaimed track Promesses which received a great reaction from the festival goers being one of the highlights across the weekend.

Radio 1 and high profile DJ Danny Howard took to the main stage showing off his dance DJ credentials to a sell-out crowd. Danny Howard is a complete natural and kept the audience's energy levels up with new and recent releases.

Headliner Steve Angello closed the main stage with a set which can only be described as magical. As one third of one of the biggest dance supergroups of all time Angello lived up to the headliner performance and expectation; pyrotechnics, lighting and fireworks all helped him close a successful weekend at We are Fstvl.