The details of the tragic accident which ended the lives of Viola Beach and their manager needs no repetition, but their short career continues to be celebrated, as demonstrated with a recent tribute from the Glastonbury-headlining Coldplay.  This release of their work is on the band's label and comes with the backing of their families. 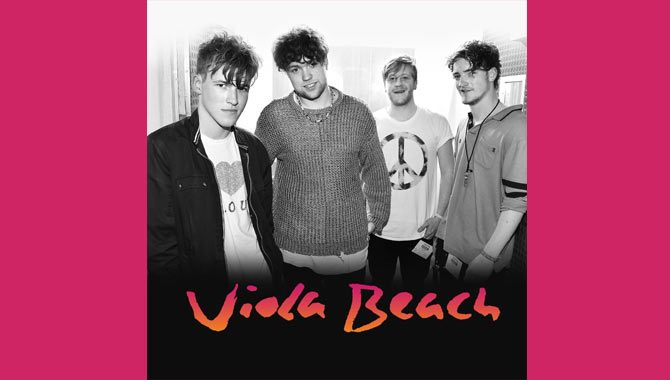 In many ways 'Swings And Waterslides' is the perfect introduction to the jangly indie-pop of Viola Beach; danceable riffs are married to a sing-a-long chorus with a touch of gang vocals.  The hooks continue marching through 'Like A Fool' and quirky 'Go Outside', while 'Drunk' shows a capability for a slightly darker tone.  'Really Wanna Call' has the sort of bouncy summer-vibe that encapsulates festivals while 'Call You Up' strays from the prototype by dropping the tempo, but impressing all the same as it recalls some of the Arctic Monkeys' work.  The energy is re-ignited for the anthemic 'Get To Dancing', while recent single 'Boys That Sing' is a fun ditty that marks itself as an obvious choice to be covered by Chris Martin on one of the biggest stages possible.

With the circumstances that are attached to this release, it would be an easy-option to make statements of grandeur or to refuse criticism of Viola Beach.  Ultimately, nobody can say how much commercial success they would have had or how their music would have developed.  However, these nine tracks are hugely enjoyable and place this record amongst the best indie records of 2016.