Review of Bridge Of Spies (Re-Issue) Album by T'Pau

Fewer times in twentieth century history have had a more prismatic effect on the beholder than the last few years of the 1980's: now subtlely rewritten by the winners (Media corporations, the cult of celebrity, globalists) the era in which consumerism outwardly replaced much of societies paternalist glue seemed far less glamorous being experienced then than reflected on now. Whilst much of it's optimism has since been revealed as naivete, that fact that 80's children bleed such a developed love of nostalgia and have kept right on spending their way to contentment means a giant slug of music sourced in the decade's post-punk-post everything miasma, like the targets of whack-a-mole, refuses to disappear. 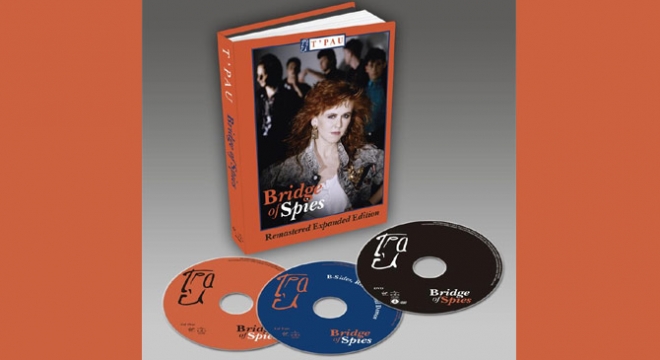 What this infers from a distance is that, without context, some of Madonna's early work appears now to be a commentary on female exploitation, or that Duran Duran were satirising the vacuousness of male modelling and couture, whilst in fact either conclusion is very wide of the mark. One of Bridge of Spies' strengths is that it rejects this notion of disguise, leaving very little scope for ambiguity, something that now can be considered a prudent move in uber-cynical times.

Much of this gutsy no-nonsense approach comes from singer Carol Decker's warts-and-all post assessment of the album which overnight turned her and then partner Ron Rogers into bona fide household names, albeit briefly. Aware of their limitations, the duo were catapulted into the dream by it - Bridge of Spies eventually sold more than two and a half million copies, a feat which looked not much short of miraculous after bridgehead single Heart & Soul vapourised here but then rocketed into the upper reaches of the Billboard chart in the US. In many ways the song's title told the story, passive, almost docile verses (The soul) giving way to Decker's throaty, committal roar (The heart bit) through a chorus as indelibly mid-Atlantic as anything else of the period. Offering a rare female perspective amongst the rife and ugly sexism of cock-rock, the Liverpudlian found herself in a unique position as a British woman working in a part of the industry where girls were expected to be objectified but not heard.

A longer time coming than she would've liked, this super deluxe edition comprising two CD's and a live plus promos DVD is far closer to her vision than the shoddily produced Greatest Hits compilations which have preceded it. There is of course the risk of reincarnating a work so prodigal , but there seems little choice in the matter: although two more albums followed from the group's original incarnation (1988's Rage and The Promise three years later) it's hard to argue otherwise that Bridge of Spies is regarded as pretty much T'Pau's definitive work by most.

It's equally correct to say that it suffers from the same cack-handed production values that ruined many a song at the time, but it's a credit to Decker and Rogers that most of the material escapes the near terminal event horizon of tinny, electronic drums and chronic lack of bass to walk in the sunlight even now. Many people will remember the histrionics of China In Your Hand, a ballad in the over emoted tradition of the time, but the airbrushed male-female dynamic of I Will Be With You and the calculated soaring of Valentine retain a much broader appeal than as mere facsimiles of Bonnie Raitt or Heart's FM chick rock.

The obvious question is whether the additional material falls into the category of either completist ephemera or buried treasure. The answer is probably more the former: for instance no-one, repeat no-one, needs all five additional versions of Heart And Soul, even if the Dance Remix is/was still surprisingly cutting edge. Live the band were considerably less manicured, and the selection of tracks from gigs in Glasgow and London reveal Decker's voice to be the real thing, impressive power with not a little sprig of country inflection, a brio masked by clumsy studio trickery.

Of the rest there are demo versions of Friends Like These, Monkey House and You Give Up, a brace of B-side covers featuring a poorly advised Rogers on vocals (Walk Away Rene and I'm A Believer, not that it really matters) alongside the exhortations of the previously unreleased Maggie. None of these offerings could be perceived as adding much to the album's core, although realistically it's a common feature of heritage releases that very little of real interest still lies buried in most archives.

Common traits then, but Bridge of Spies stands as unreconstructed in an age where the decade's totems have often been re-appraised to the point of critical blindness. Instead, it's refreshing to hear again a record which was unashamedly populist, constructed for the purposes of fame gathering and held at it's core the high concept of people's fallibility. That T'Pau never again captured it's esprit de corps was inevitable: sometimes - in fact most of the time - smash hits are about taste meeting rare moments of inspiration. Their signature release stands then as not one of the best records of it's time, but far from being the worst.