Ransom Scenery hail from Springfield, Illinois and they recently released a self-titled new album which can only be classified as ethereal, space rock. The band consists of two members: Chaepter Negro, who provides vocals and plays piano, mandolin and cello; and Drew Lowery handles drums and percussion. 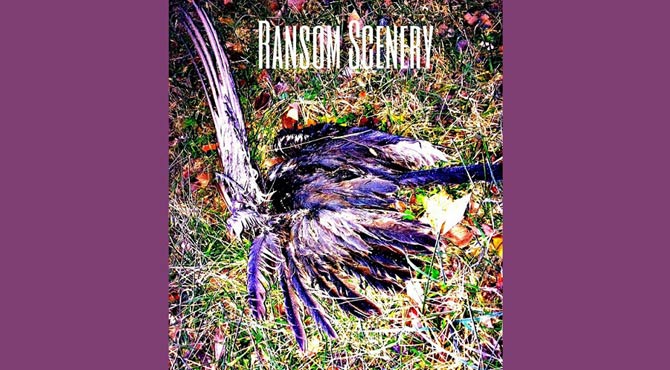 Rock historians attribute the origin of space rock to Joe Meek, who, in 1959, released a concept album called 'I Hear a New World'. However, the term space rock usually refers to progressive rock bands of the 1970s, such as Gong, Hawkwind and even Pink Floyd. The term was resurrected after Y2K to describe bands like Comets on Fire, The Flowers of Hell and others of similar ilk.

Ransom Scenery has added an avant garde aspect, one that skirts around the edges of experimental rock, to its own interpretation of space rock. Essentially, Ransom Scenery's sound revolves around extravagant tropes and musical allusions thick with somber intensity. It's a sound that one either enjoys or dislikes, depending on personal taste. On the one hand, to those that enjoy space rock, the songs on the album will become sylphs of piquant beauty.  On the other hand, those who don't like space rock will discover little more than indefinable, burlesque noise.

Ransom Scenery encompasses nine original songs. The first track, and probably the best, is 'Slowly Spinning' which seems tailor made for the soundtrack of some bizarre sci-fi flick, one of those sci-fi flicks where "the experience" takes precedence over plot and dialogue. The song has a warm melody, along with slow-feel vocals, as if the vocalist is ensconced in a cocoon of honey. The effect is dreamy, while suggesting a degree of hollowness, like Fritz Lang's 'Metropolis'.

'Driplove' is one of those songs that precisely resembles its title, as if a mad alchemist managed to distill Love, bottle it, and then proceeds to pour it out. Imagine a rain forest, where Love literally drips from fat leaves.  Unfortunately, a piece of smarmy dialogue, inserted in the middle of the tune, ruins the effect.  At that point, the song becomes repetitive.

One of the more interesting songs on the album is 'My Golden Shield', which is very surreal, sounding like music emanating from a hologram.  'Just Tour' can only be described as frenetic noise, with vague voices whispering in the background.  'Unconditional' sounds tinny and artificial, like a toddler experimenting on Dad's synthesizer.  And 'Holozoic' is a Pixar soundtrack gone bad:  robotic noises that segue to cacophony.

The rest of the songs on the album follow a similar trend:  dreamy, spaced-out compositions that float and spin and pulse through an emotional vacuum.  Overall, Ransom Scenery resembles a shrill yammer on a single tone.  And for the most part, the arrangements seem haphazard and borrowed from who knows where.

'Ransom Scenery' lacks the absolute serenity that space rock usually evokes.  Devotees of space rock may want to listen to it and might enjoy it, but it's not everyone's cup of tea.