What are you most likely to do when you've had a few drinks? Finally tell someone you find them utterly irresistible (or utterly resistible)? Buy a vintage Triumph Stag off eBay, even though you can't drive? Whatever your proclivities, I reckon that 'Writing Iggy Pop a letter' is more of an outlier on the standard deviation chart of spontaneous alcohol-influenced whims. That's what PINS did. I desperately hope that it was on floral notepaper and began, 'Dear Mr Pop'. Whatever its phrasing, it had the desired effect of recording a vocal, leading to his poetic stylings on EP highlight, "Aggrophobe". 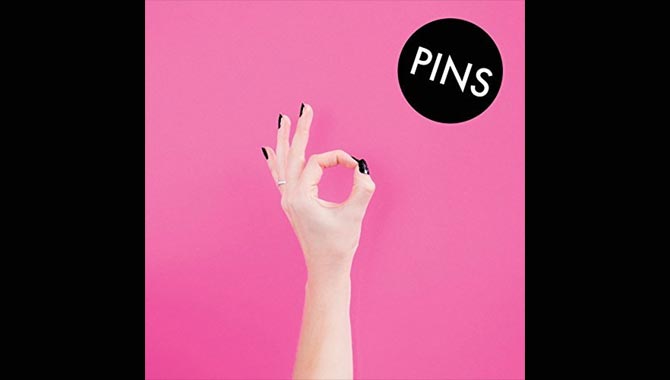 "Velvet Morning" from 2013's debut "Girls Like Us" had already seen PINS traversespoken-word territory, but what that track possessed in more evanescent delicacy, this counters with breezeblock bass, thunder drums and the refrain, 'So many actions, so many voices', delivered with insistent, mesmeric, male and female vocal lines that are a split second out of time with each other, adding to the intended frisson of discomfort. With the ominous song's title, a bastardisation of 'agoraphobe', it captures how phobias oppress, overwhelm and enfeeble our senses, making sufferers wish, 'The sooner I'm deaf, the sooner I'm dead' and feel 'constantly alone and out of breath'.

EP opener "Bad Thing" lurches swaggeringly into view, breaching your peace, fuzzed beats belching from the visceral depths. There's a subterranean, industrial grumble to this electronic rock, as if the Morlocks from H.G. Wells' The Time Machine have formed a supergroup with My Bloody Valentine. The lyrics are simple but shoutalong - the 21stCentury descendants of "Trouble" by Shampoo - 'Everyone says we're no good,/ We don't do what we should.'

"All Hail" has a driving surf-rock guitar hook that comes from somewhere sunnier than Salford. With celestial 'aahs', and the strident, harmonious 'All hail', over a groovy late-60s psych-rock instrumental bed, it revels in how 'Living is dangerous when you are a girl'. "In Nightmares" has Kraftwerk-Autobahn synths, layered over a bassline heavier than Jabba the Hut. 'You were not the one' is chanted in the closing stages, like a rather polite football crowd or an individual's mantra to ward off thoughts of a terrible suitor. The cover of Joy Division's "Dead Souls" at the end is hardly an afterthought. It is reminiscent of the Cure album that bears her name, and lead singer Faith is at her morose best on this track, the drums ready to beat down your door, the guitar reverberating with the haunted hollowness that suffuses the lyrics.

Pins had only taken themselves off to the Scottish borders to develop material, to bag some demos - not at all intending to release anything. They've ended up with a throbbing new EP, gettin' Iggy with it for good measure.